Week 9 Review: Once Upon a Dream 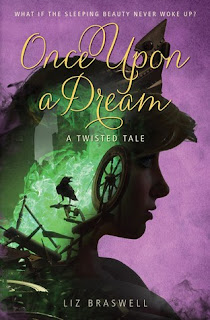 From Goodreads:
What if the sleeping beauty never woke up? Once Upon a Dream marks the second book in a new YA line that reimagines classic Disney stories in surprising new ways.

It should be simple--a dragon defeated, a slumbering maiden, a prince poised to wake her. But when said prince falls asleep as soon as his lips meet the princess's, it is clear that this fairy tale is far from over.

With a desperate fairy's last curse infiltrating her mind, Princess Aurora will have to navigate a dangerous and magical landscape deep in the depths of her dreams. Soon she stumbles upon Phillip, a charming prince eager to join her quest. But with Maleficent's agents following her every move, Aurora struggles to discover who her true allies are, and moreover, who she truly is. Time is running out. Will the sleeping beauty be able to wake herself up?

My Review:
I loved reading this book! So fantastic, another great take on Sleeping Beauty, and this time the change from the movie came at the end, not the beginning. That was really great, and it makes me wonder what pivotal moment in the next book will change, and where it'll be!

One thing that I'm really enjoyed about this series is how it takes the fairy tale that we know from the movies, and turns it on its head. Like the gifts that the fairies gave her, grace and beauty, a good voice. Which is all in well when she's a princess already promised in marriage. But she's also an only child, and they aren't the most useful gifts in ruling a kingdom!

And while the idea of the fairies to put the people of the castle to sleep connected to Aurora so when she wakes up, she'd have familiar faces is a nice idea. But also the wrong one-she didn't know the inhabitants of the castle, she only knew her aunts. And the results of the inhabitants being a part of Aurora's dream were pretty bad!

One thing that this book dealt with, is that fact that Aurora grew up isolated. And bored, that the day in the woods when she met Philip, that was a rare day of joy. And it brought up what feelings a person would have to deal with, growing up like that!

King Hubert, Prince Philip's father, was a really funny character! He didn't have a lot of time in the book, besides when he was mentioned, but when he was there, he was pretty hilarious. Also, he was helpful, which was greatr!

Loved this book, and I can't wait for the next fairy tale Disney movie will be done next! (Though I really hope The Little Mermaid isn't done, because it's my favourite, and I don't want to see it though the lens of this series, that'd kinda break my childhood memories!)