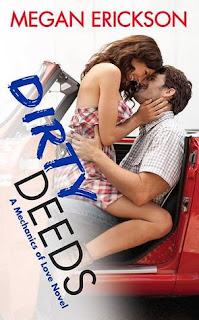 From Goodreads:
Alex Dawn is saying no to men. No to bad relationships, disappointments, and smooth-talkers. Focusing on her family and her job at Payton and Sons Automotive keeps her mind occupied and her heart content. She doesn't really miss a man's touch, until one night, a man shows up with the body of a god and a voice from her dirtiest dreams.

L.M. Spencer is only in Tory, Maryland, to scope out the town as a possible site for one of his company's hotels. The British businessman didn't expect his car to break down or to find the hottest little American he's ever seen holding a tire iron, piercing him with bright blue eyes.

They agree to one hot night, one dirty deed to burn out the chemistry between them. But from their first kiss, Alex can't stop saying yes to this man. And when Spencer's company threatens everything she cares about, they must make the choice to stand together or apart.

My Review:
I enjoyed this book so much! Such a great end to the Mechanics of Love series, of these characters that I've really enjoyed getting to know! Though it is sad to be at the end of the series, since we will only see these characters in rereading these books (unless we're lucky and get a 3rd series!)

I really enjoyed Alex. She's a female mechanic, and she doesn't fit the stereotype because she likes make up. Not so much clothing, but as someone who doesn't care about either, well, it was great to see more than one side of her personality!

I also really enjoyed Spencer, he was someone who knew who he didn't want to be, and made strides to make sure he didn't end up like his dad. Which makes it a bit funny that he falls in love with Alex, who is a mechanic, works with her hands-exactly what Spencer doesn't want to be. So great to read!

They had a lot of ups and downs, the supposed one-night stand, that his company wants to build in Tory, and his best friend's husband wants it to be on the Payton land. But they worked through that, and it was so great to read! Also amazing was how she dealt with her ex, that was so great!

I enjoyed this book so much, it was so great, and I can't wait to read more books by Megan Erickson!