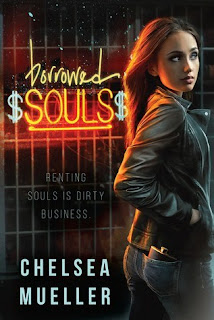 From Goodreads:
Callie Delgado always puts family first, and unfortunately her brother knows it. She's emptied her savings, lost work, and spilled countless tears trying to keep him out of trouble, but now he's in deeper than ever, and his debt is on Callie’s head. She's given a choice: do some dirty work for the mob, or have her brother returned to her in tiny pieces.

Renting souls is big business for the religious population of Gem City. Those looking to take part in immoral—or even illegal—activity can borrow someone else's soul, for a price, and sin without consequence.

To save her brother, Callie needs a borrowed soul, but she doesn't have anywhere near the money to pay for it. The slimy Soul Charmer is willing to barter, but accepting his offer will force Callie into a dangerous world of magic she isn't ready for.

With the help of the guarded but undeniably attractive Derek—whose allegiance to the Charmer wavers as his connection to Callie grows—she'll have to walk a tight line, avoid pissing off the bad guys, all while struggling to determine what her loyalty to her family's really worth.

Losing her brother isn't an option. Losing her soul? Maybe.

My Review:
Reading this book was so great! It was so unique with the whole soul rental thing and how if you rented one, any sins that you committed would go with it, not with your own soul. Morally, it'd be kinda awful if you did that, but Callie has no choice in this book!

The world in this book was really awesome! I really enjoyed how the magic worked, the rules and such. Combined with all the threats that she faced, from the mob boss, from the Soul Charmer, the Soul Charmer's adversary, Tess, yeah, Callie had a lot on her plate!

I really didn't like her brother. Sure, she said he was a good guy when he wasn't high, but he's an addict, and he kept using her to bail him out. And at the end, once she got him free from his current mess, he wanted her to help him more. Bah!

One thing that got to me, was the big secret in Callie's past that was so bad, that she kept bailing him out? That this final thing would be the last? She called Child Protective Services on her mom, because Zara was neglectful. What with her family first mantra, that's powerful guilt. But come on, I thought she'd actually done something bad! That was protecting herself. Bah!

This book was really awesome, and I enjoyed it so much!