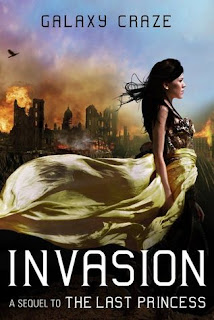 From Goodreads:
After defeating Cornelius Hollister—the man who killed her parents and tried to destroy her country—Princess Eliza Windsor wants nothing more than to live quietly with Wesley, the boy she loves. It’s been ten years since the Seventeen Days, the series of disasters that decimated the earth. England was the only country to survive—or so they thought.

Others survived the Seventeen Days, and soon England is engulfed in suffering and bloodshed once again. Eliza and Mary become prisoners in their own home. To save her country, Eliza will have to rely upon all her inner strength—and learn to trust where she least expects it.

In the sequel to The Last Princess, Galaxy Craze has written another darkly atmospheric tale of adventure, suspense, and the unbreakable power of true love.

Why the time hasn't come yet...
I don't know, I mean, I loved the first book, but it's been a really long time since I read the first book! So I'll probably have to reread it first before I read this book. Hopefully I'll read it soon! What about you guys? Happy reading!
Posted by Louisa @ Words I Write Crazy at 6:00 AM