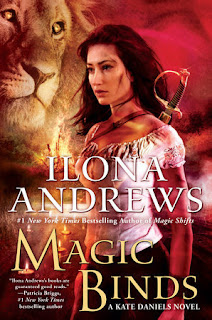 From Goodreads:
Mercenary Kate Daniels knows all too well that magic in post-Shift Atlanta is a dangerous business. But nothing she's faced could have prepared her for this…

Kate and the former Beast Lord Curran Lennart are finally making their relationship official. But there are some steep obstacles standing in the way of their walk to the altar…

Kate's father, Roland, has kidnapped the demigod Saiman and is slowly bleeding him dry in his never-ending bid for power. A Witch Oracle has predicted that if Kate marries the man she loves, Atlanta will burn and she will lose him forever. And the only person Kate can ask for help is long dead.

The odds are impossible. The future is grim. But Kate Daniels has never been one to play by the rules…

My first review of Magic Binds
My second review of Magic Binds
My Review:
I had to read this book again, it's almost time for Magic Triumphs to come out, so I had to know where we'd left things! And I'm so glad that I did! I mean, this was a really great book, but having now read Iron and Magic, that mention of Elara Harper, yeah, just amps the special-ness up!

So much happens in this book. It's not really a mystery to solve, per say, they know who the bad guy is-Roland, and they know what he wants to do/what could happen. The problem is is finding a different future and carrying it out. Which was so great to read!

For some reason, I thought that Roland found out that she'd brought her aunt's consciousness in this book. But I didn't read any such scene. I don't know where the idea came from! But I can't wait to see it in Magic Triumphs, because I know it's going to happen, because it has to!

I can't wait to see where things are going to go from here! There was the mention of Elara as the White Warlock/abomination in whatever plan she, Erra and the witches were cooking up. But it seems that events might conspire that Kate and Roland might become unlikely allies, at least for a bit! Can't wait see what's going to happen!

This book was so freaking great, and I'm so excited and a little sad for Magic Triumphs, I want to know how it's all going to end!