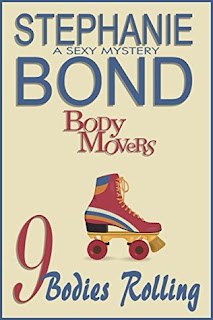 From Goodreads:
Round and round we go...

But her best gal pal Hannah is always there to cheer her up, and Hannah has taken up a quirky new sport--roller derby! The matches are a colorful spectacle of bodies maneuvering to score, but the fun stops cold when a dead body rolls onto the scene. Carlotta believes the accident is anything but--especially when skaters' bodies begin to pile up--in and out of the ring! Could Hannah be next?

My Review:
Man, I loved reading this book! This series has always been a lot of fun to read, so yeah, I was really excited to read this one, especially with how everything was kinda wrapped up in the previous book, I couldn't want to see  where things would go from there!

There was a lot going on in this book, from their mom's medical appointments, to her relationship with Priscilla. Plus there was her dad acting strangely, which turned out to be a huge surprise! There was a lot jam packed into this book which was so great!

I'm kinda worried about Wes. With his father back, well, yeah, his dad has some particular ideas about things, and it's not good for Wes, because they're contrary to who he is, and that sends him down a dark direction. I hope he pulls through!

There was mostly a happy ending, the murderer was caught, though that wasn't a really big part of the book. Liz turned out not to be pregnant, but Carlotta knew that Jack wasn't right for her, but then Cooper left, so yeah, that wasn't good. But that ending opening the Christmas presents that they've waited so long to open as a family, yeah, that was an ending! And an evil cliffhanger one at that!

This book was so fantastic, and I enjoyed reading it so much! I need the next book!