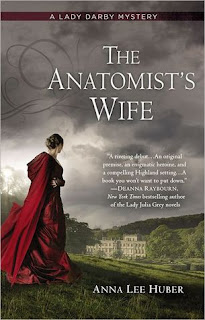 From Goodreads:
Scotland, 1830. Following the death of her husband, Lady Darby has taken refuge at her sister's estate, finding solace in her passion for painting. But when her hosts throw a house party for the cream of London society, Kiera is unable to hide from the ire of those who believe her to be as unnatural as her husband, an anatomist who used her artistic talents to suit his own macabre purposes.

Kiera wants to put her past aside, but when one of the house guests is murdered, her brother-in-law asks her to utilize her knowledge of human anatomy to aid the insufferable Sebastian Gage--a fellow guest with some experience as an inquiry agent. While Gage is clearly more competent than she first assumed, Kiera isn't about to let her guard down as accusations and rumors swirl.

When Kiera and Gage's search leads them to even more gruesome discoveries, a series of disturbing notes urges Lady Darby to give up the inquiry. But Kiera is determined to both protect her family and prove her innocence, even as she risks becoming the next victim...

My Review:
This book was a really fantastic read! It's a historical, but it's also a mystery, and yeah, the setting is a pretty important aspect here, since the attitudes and values of the time in regards to women, and to murder, well, they don't go well together, in fact, they clash, like, fully. But that just makes it so great to read!

Lady Darby had an awful husband, and when a major fact about what he did came out after his death, she was ostracized and blamed. It was wildly unfair, and now she's kinda made herself a hermit in her sister's household. But then her sister holds a event, well, that goes out the window. And then the murder happens. Of course she's going to investigate, what with the knowledge she learned from observing her husband-as well as the fact that she'll be blamed if the real killer isn't found. Not fun!

I really enjoyed watching her with Gage, they're a great partnership. I know in later books, they're going to get married, and yeah, I can easily see that happening. Their interactions were full of sparks, and the mix of civility and sarcasm was a great combo!

The mystery, yeah, that was pretty awesome. I did go along with her, because yeah, that evidence is circumstantial. And Gage should've known, being an experienced investigator, that as well, though she was more basing that on her gut based on the facts. But it did lead to a tense showdown, which was really great to read!

Loved reading this book, it was a fantastic read and I can't wait to read more!