Today, I'd like to welcome over Alexander Galant, author of Depth of Deception, over for a guest post!

What Are Your Writing Quirks & Must-Haves To Write

When I first read this suggestion of a blog, I didn't think I would have much to write about. But as I thought of it, I've already mentioned one quirk in a previous blog: I have to have the ending of a story before I begin. If I don't have the ending, I can't write it. I think most authors are the opposite, and I can see their joy in discovering the story as it unfolds. But for myself, especially with a mystery, I like to know the end so I can have the right number of clues, a dash of twists and a pinch of foreshadowing.

Another quirk I have is drinking Clamato while brainstorming details and dialogue. There are a few people (especially in the United States) that will have no idea what Clamato is. I didn't realize this beverage was originally from Canada until I was in New York a few years ago and ordered a Virgin Caesar. The server and bartender had no idea of what I was talking about.  It's like a Virgin Mary (Bloody Mary without alcohol) but it uses Clamato instead of tomato juice. So what is Clamato? It is basically tomato juice, with spices and clam broth. A Bloody Caesar is a popular cocktail in Canada. Since I rarely drink alcohol, I have it on its own as I plot out details to a story. When I'm about to do some serious writing I buy Clamato juice in bulk to have on hand.

I also listen to music from whatever era that my story is in. Sometimes a soundtrack to a musical set in the same era works well too. This was a fun challenge for 'Depth of Deception' since most of the novel is set in 1982.  I listened to certain 80's songs but when I was writing the character of Myra, I listened to popular music from Titanic's age, such as ragtime, as well as the Broadway soundtrack of Titanic the Musical. While writing the dark Victorian chapters of 'Bloody Mary Kelly', I listened to the Broadway soundtrack of 'Jekyll & Hyde'.  For the novel that I'm working on right now, I'm listening to 'Les Misérables', 'The Scarlet Pimpernel' and select pieces from the French opera: 'La Muette de Portici'.

So I suppose I have few writer's quirks, but I can imagine that we all have our own, don't we? 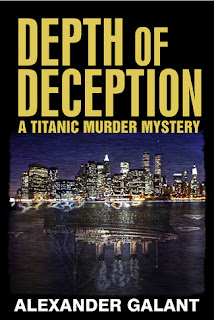 From Goodreads:
The year is 1982, and a beautiful young woman, dressed in Edwardian clothing, is found floating unconscious in the North Atlantic with a 1912 boarding pass to the RMS Titanic. Over in England, Callum Toughill, an insurance investigator, is assigned the case of a missing brooch that was stolen during a horrific, unsolved murder in 1909 Glasgow. He is chosen because it was his own grandfather who had botched the original investigation.

Despite the painful family memory and likelihood that all evidence will be long gone, Callum dives in. As he begins to uncover the tangled truth that the missing brooch may have ended up on the ill-fated RMS Titanic, someone is one step ahead, trying to stop him. Miraculously the mysterious young woman, nicknamed 'Myra' because of the inscription on her locket, survives and awakes in a Manhattan hospital with no memory of who she is. Myra’s vague recollections are from the gilded age of 1912 and she is lost in the alien, harsh world of 1982.

A respected and wealthy Titanic survivor named Edward Hoffman assists in exposing her as a fake, but the plan backfires and stirs up more details in Myra's memory which include the fact that Edward may be her son. Is it a bizarre case of time-travel or an elaborate hoax?

My Review:
This book is definitely a book for people who love complex plot lines, especially murder mysteries! And the question of is this a paranormal book with time travel, or did it even happen! It's left quite open for debate, and I'll be thinking of this book for a while!

We got to meet a lot of characters, with half the story taking place in New York, the other half in and around the UK, from England, Scotland, and Ireland at the end. So there was double the amount of characters, with twice the amount of mystery, the NY story about Myra, and her and Edward's story, the story on the other side of the pond about this brooch and murder, and all the clues and mysteries leading from that, with lots of leads and clues and names!

There were a few things that I wish had been included, just little details, like if the doctor would wake up, because last time we see her, she's being protected by a nurse (if you've read the book, you know what I mean) And the other was something that I though was being developed into the plot, a fake Titanic survivor, she was threatening Edward, yet nothing came of it. Maybe another novel, where we can decide more fully if we think that the events of the book actually occurred, or not! And what was going to happen next, because the shift between the second last chapter and the epilogue was very jarring, so yeah, I'm rooting for a sequel!

Depth of Deception was a wonderful, wonderful book, and one that I really enjoyed it! Hope you guys check it out! 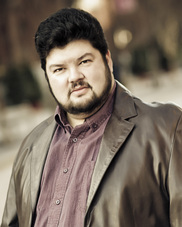 Bio:
Alexander Galant was the historical researcher for the novel 'Dracula the Un-Dead', which was on the New York Times Best Sellers list in October 2009. Alexander also co-wrote the screenplay adaptation that was optioned briefly by Jan de Bont and adapted the novel into a dramatic stage reading for the Toronto book launch of Dracula the Un-Dead, which brought out the highest turnout for any event on the book tour.

Alexander has also written and directed several short films including "The Jigsaw Puzzle", which won the Festival Buzz Award (most talked-about film) in the New York Independent Film Festival; "First Light", Winner Bronze Remi Award for Fantasy Horror at the WorldFest Houston, USA, Special Commendation Award at the Festival of Fantastic Films, UK, and Best Technical Achievement from the International Festival of Cinema and Technology; "The Missing Piece", Winner Silver Remi Award for Suspense Thriller at the WorldFest Houston, USA; and co-wrote and directed "Star Wars: Blasted Behavior", a finalist in the Atom Films/LucasFilm Star Wars Fan Movie Challenge (George Lucas was one of the judges), which also won the Best Foreign Sci-Fi Film Award at the New York International Film Festival and continues to make the festival circuit this year.

Alexander's love of historical details can also be seen in some of the stage productions he has directed, such as the silent film era of "Singin' in the Rain" (Act-Co Thea Award for Outstanding Achievement in Live Theatre), a 50-year span in "Love Letters" and the World War II Amsterdam annex for "The Diary of Anne Frank". 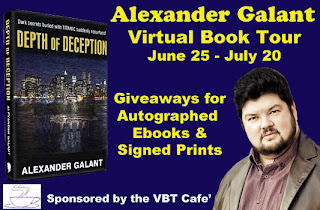