Week 30 Review: Until I Die 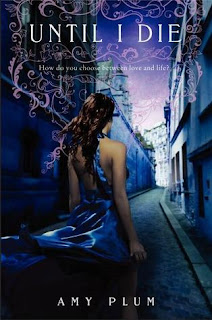 From Goodreads:
Kate and Vincent have overcome the odds and at last they are together in Paris, the city of lights and love.

As their romance deepens there's one question they can't ignore: How are they supposed to be together if Vincent can't resist sacrificing himself to save others? Although Vincent promises that he'll do whatever it takes to lead a normal life with Kate, will that mean letting innocent people die? When a new and surprising enemy reveals itself, Kate realizes that even more may be at stake—and that Vincent's immortality is in jeopardy.

In Die for Me, Amy Plum created a captivating paranormal mythology with immortal revenants and a lush Paris setting. Until I Die is poised to thrill readers with more heart-pounding suspense, spellbinding romance, and a cliff-hanger ending that will leave them desperate for the third and final novel in the series.

My Review:
This book was OK, but not as good to read as Die for Me was. I mean, I stopped reading it to read Third Grave Dead Ahead, and Rapture, and putting books isn't good for the book, so yeah, not so good. But once I was about a third in, Until I Die picked up a lot, from the little clues like behaviour, and being the only new characters, of course they're going to be important!

Since it was a while since I read Die for Me, I'd forgotten a few of the details of the world this series is set in, and the characters and such, but as I read this book, I got those details back, in an off-hand manner so that for people who haven't read Die for Me, so you only would have to read Die for Me before Until I Die if you like reading books in order, because this was fairly well self-contained, and that's always a good thing, because what if you didn't know that a book was a sequel, and you read it first instead of the first book? So yeah, enjoyed that!

Oh, what we learned in this book! We got new characters where were really surprising the the end, what with Violette being the leader of the bad guys and all. And that Kate had suspected Arthur, and was wrong,  well, that twist really added some omph to the ending, and man, was it a cliffhanger, what with Vincent's body held captive by the bad guys, and then her hearing his voice, that his body was dead, and his spirit was wandering free. Oh, yeah, I want to know how they're going to deal with that now! I want If I Should Die now!!!

The beginning was a bit slow, but the end made up for it. I just had to get there, so if you felt like I did for the beginning, just read on, because it get's better! Read this book if you loved Die for Me!