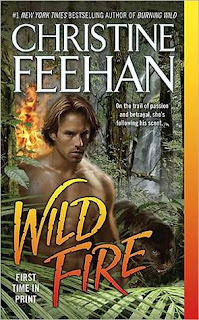 From Goodreads:
Leopard shifter Connor Vega carries the scent of a wild animal in its prime, and bears the soul-crushing sins of past betrayals. Isabeau Chandler's never forgiven him-or forgotten him. The mating urge is still with her, and hotter than ever. Dangerously hot...

My Review:
Oh, this was a great book, but I wish that the reason why he left his mom, and didn't come back, as far as we know, was in this book, because that would've put some more insight into who Conner is. And I'm wondering about Isabeau's parentage, did her dad adopt her, or was she related somehow to him? That was something that was mentioned in passing, and yeah, I'd like to know more about it!

I enjoyed their relationship, and how they learned how to work together, to forgive each other, and yeah, just how to be together as two people in love and wanting to spend the rest of their lives together. Because the majority of it was real stuff, even if the minority of it was the fact that they are leopard shifters!

Their wedding, that was really sweet. And then it sucked that it ended so badly, with the evil leopard, thinking that Isabeau belonged to him, beat and bit her. That was just horrible, and that he thought that a 2 day thing was more then an over a year claiming? Idiot and a horrible person!

I hated that the grandfather, and his guard, were part of the evilness, that was just sad, I wish that they'd been good guys, but nope, so yeah, they deserved what they got, but yeah, that was sad, and I wish that it hadn't been there!