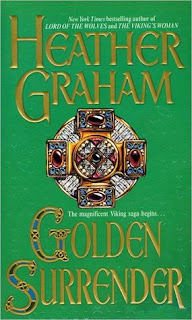 PRINCE OLAF OF NORWAY—Lord of the Wolves, the golden Viking warrior who came in his dragon ship to forge a great kingdom in the Emerald Isle.

PRINCESS ERIN—Daughter of the Irish High King, the ebony-haired beauty who swore bitter vengeance on the legendary Norseman who had brought death and destruction to her beloved homeland.

Yet, in the great Norse and Irish alliance against the invading Danes, it was her own father who gave her in marriage to her most hated enemy. Bewitched by Olaf's massive strength, seduced by his power, still Erin vowed that neither the wrath of his sword nor the fire of his kiss would sway the allegiance of her proud and passionate heart.

My Review:
So I'm finally reading the first book in the series! It's about time, I already read the 2nd and the 3rd! So now the first, the beginning! And the parents of the heroes for the next two books, so no spoilers or anything!

I really enjoyed Erin and Olaf, they were real, they fun to read about. Olaf was an alpha male and possessing, but Erin was a fighter, so they went along well, once they worked out the kinks-he let her be herself, and she didn't like him overbear her! It was a really great partnership!

The conflict in this book, it just sucked me in! I know they're going to be fine, but reading about everything that was going on, it was a bit dangerous, but just so dang entertaining! I enjoyed it so much!

Knowing that they're going to have a whole posse of kids, well, I knew that a) they'd end up together in the end, b) they'd survive everything that happened in this book, and c) their love is not going to dim, and neither is their passion! Which lead to a really great book!

I just really enjoyed reading this book so much, it was really great, and I'm glad to have finally read the whole series!