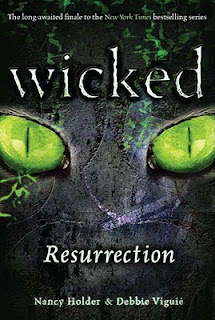 From Goodreads:
Who is Alex Carruthers? That is the question fans of the Wicked series have been asking since the seemingly final book, "Spellbound," left readers on the edge of their seats. But now, the true and final conclusion offers a heart-stopping, magical adventure about witches, destiny, and the beyond.

My Review:
While I really enjoyed this book, the reaction to who Alex was didn't really satisfy me, there was a bit of a battle, then they moved on to the bigger bad guy, and then that was it. But I finally made it to the end of this series, yeah!

There's been a few plot lines that have been running, the current characters, the past characters, and how the history knits in with what's happening in the present, and now it's all coming to an end, and for me, it's like, yeah, done!

Things felt ramble-y, and unconnected, and yeah, most of this book, it was just hard to read. I mean, the whole series has felt like it's gone downhill, and for me, this was the worst book. If they'd stopped at one, I think it would've been much better overall.

But that ending, gah! It was just over so quickly! If they had to make it 5 books long, then the final battle, and the fall out and the ending, should be savoured, but it was like, wham, done, which just wasn't satisfying!

All in all, a good book, but one I won't read again, just too many disappointments and such! Which really sucks, since I know they can write a good series, the Crusades was amazing, but this one was just meh.