The Fallen Queen: Interview and Giveaway

So today, I'd like to welcome over Jane Kindred, author of The Fallen Queen and The Midnight Court, over for an interview!

What audiences, do you think, read your book(s)?

What is something you’d tell yourself when you were first started on your writing journey, not to worry about?

I had to tell myself not to worry about whether I was writing “great” fiction, just “good” fiction. Worrying about being judged as “less than” Some Random Awesome Writer held me back for a long time.

What would be something that you’d tell yourself to worry about when you first started on your writing journey?

I worry about everything, so I didn’t really have to tell myself to do it about anything. ;)

Your favourite part of your writing journey?

Falling in love with the characters. Starting a book for me really is like a new relationship, and who doesn’t love that feeling? I’m a serial book monogamist.

Your least favourite part of your writing journey?

Marketing. Hands-down. I’d rather be writing than talking about it. Not that I’m not happy to be here. ;)

A typical writing day for you?

I work a full-time day job, but I work from home, so I generally start out in the morning before breakfast reading over what I wrote the night before and doing minor edits, then I hit the day job, and around dinner time, I switch over to writing. My goal is at least 1,000 words a day, and it generally takes me several hours to get that.

One book you read that you wished you’d written?

I do a little of both. I have difficulty writing from an outline, but I do like to plot out what’s going to happen at least a chapter ahead so I don’t write myself into a corner (which I’ve done many times).

What do you think is your strongest area in your books? (characters, plot, dialogue, ext)

I tend to think my dialogue is strongest, because it’s often what I have pages of initially, without much action in between. I see my stories in my head like a long conversation.

What do you think is your weakest?

I’d have to say plotting. There are all those corners to get out of because I’ve avoided it until I can’t get away from it, and I always want to resolve things a little too easily. As a reader, I get really anxious over the multiple obstacles heaped upon obstacles, so I hate doing it to my own characters, but I know it makes for a better story.

What helps you get through a novel when it’s dragging while writing?

Having a daily word count goal helps, and reminding myself that it can be 1,000 sucky words, as long as there are words, and I can go back and fix them later, helps me get past the times when they just aren’t flowing.

Tradition or self published, which one is best for you and why?

Right now, for me, traditional publishing is the best option. I think it takes a certain dynamic, outgoing personality to succeed in self-publishing, and I don’t have it.

Do you participate in wrimos?

No. I’m not a fast writer, and when I do try to write quickly, such as motivational “writing sprints” with friends on Twitter, I usually have to scrap everything I’ve written and start over.

Getting to decide how the story turns out—although the characters tend to have their own opinions. But one of the reasons I started writing was that I hated being sad after reading a book, no matter how good it was, and I wanted things to turn out for the characters in at least some kind of an HEA.

If you could design a perfect room for writing, what would it look like?

A big desk with a huge, comfy chair, bookshelves full of books, and room for my cats to curl up next to me instead of trying to push the laptop off my lap. And it would have a lot of windows with gorgeous views, but no close neighbors I could hear through them. And I wouldn’t mind a nice, crackling fireplace in winter.

A rough estimate of how many books do you think you’ll publish/have published?

Since I’m not a fast writer, I can generally only produce one full-length manuscript a year. Multiply that by whatever I’ve got left. I’d like it to be a long time.

What influenced you to be a writer?

Two of my great aunts were published authors, and they used to send my mother autographed copies of their latest books for Christmas. I loved those, and I thought it was really amazing to actually know a real writer. I wanted to be one when I grew up, so I am.

How many books and ebooks do you think you have?

I don’t have a lot of room to keep books in my apartment, so I only have a few dozen. The rest I give away to make room for new ones. I’ve only recently started reading ebooks, so that collection isn’t very big yet, either, but I’m sure I already have more ebooks than paper. I have to say, though, that I miss just “having” them. Ebooks seem a little less personal.

Writers who influenced your work aka some favourite authors?

Lynn Flewelling, whom I mentioned above, is one of my favorite writers, and Jacqueline Carey is another. Writers who’ve influenced my work but don’t necessarily write anything like what I’m writing include Shakespeare, C.S. Lewis, Piers Anthony, and Philip K. Dick.

What sparks a novel for you?

Lots of things can spark one—music, a movie, another book, the weather—but they always start with a distinct personality who insists on being brought to life.

Giveaway:
I'm hosting a giveaway of either this book, or a preorder of The Midnight Court that you'd get on the release date. It'll be a ebook copy, and so it'll be International. I'll pick a winner via random.org on August 7th, so you have 2 weeks to enter.

To Enter:
In the comments, tell me something that you think you'd like about this book and your email. For Bonus Entries, 1 each, (and if you've already done them for a previous giveaway, say that) 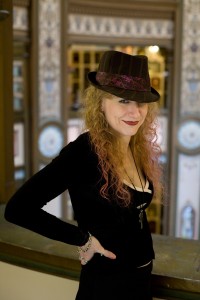 Bio:
Jane began writing romantic fantasy novellas at the age of 12 in the wayback of a Plymouth Fury—which, as far as she recalls, never killed anyone…who didn’t have it coming. Born in Billings, Montana, she was soon whisked away to Tucson, Arizona where she spent most of her childhood ruining her eyes reading romance novels in the sun and watching Star Trek marathons in the dark. Although she was repeatedly urged to learn a marketable skill in case she couldn’t find a man to marry her, she received a B.A. in Creative Writing anyway from the University of Arizona.

She now lives in San Francisco with her son Samson, two feline overlords who are convinced she is constantly plotting their death, and a cockatiel named Imhotep who punishes her for sins in a past life (and whom she frequently imagines tastily smoked, dried, and splayed on a stick like omul fished from Lake Baikal).

Her pen name was inspired by the twin sister of Philip K. Dick who died shortly after their birth, and by whom he felt haunted until the end of his life.

She fights for my life and I for hers, eternally. I am damned always to be separated from her/and with her, in oscillation. -Philip K. Dick


Having had numerous odd little moments of synchronicity in her writing and her life with things Dickian, it seemed appropriate. 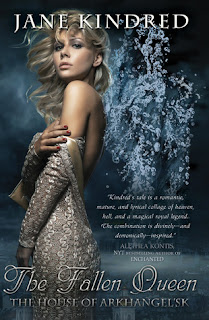 From Goodreads:
Heaven can go to hell.

Until her cousin slaughtered the supernal family, Anazakia’s father ruled the Heavens, governing noble Host and Fallen peasants alike. Now Anazakia is the last grand duchess of the House of Arkhangel’sk, and all she wants is to stay alive.

Hunted by Seraph assassins, Anazakia flees Heaven with two Fallen thieves—fire demon Vasily and air demon Belphagor, each with their own nefarious agenda—who hide her in the world of Man. The line between vice and virtue soon blurs, and when Belphagor is imprisoned, the unexpected passion of Vasily warms her through the Russian winter.

Heaven seems a distant dream, but when Anazakia learns the truth behind the celestial coup, she will have to return to fight for the throne—even if it means saving the man who murdered everyone she loved.