Week 28 Review: Return of the Warrior 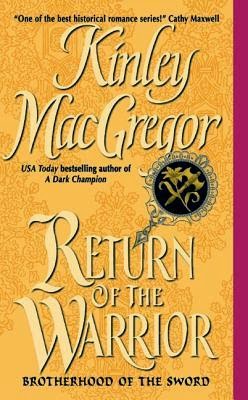 From Goodreads:
Fearless men, their allegiance is to each other, to the oppressed, and to the secret society known as the Brotherhood of the Sword -- and they must never surrender to the passionate yearnings of their noble hearts.

Fiercely devoted to her people and her land, Queen Adara refuses to let a power-mad usurper steal her crown. But the only way to protect what is hers is to seek out the man she married in childhood.


A proud, tormented warrior, Christian of Acre owes allegiance only to the mysterious Brotherhood -- and has no wish to be king over anyone but himself. Now a bold and beautiful stranger has appeared in his rooms, tempting him with an irresistible seduction and demanding he accompany her back to their kingdoms ... or, at the very least, provide her with an heir to her throne. Though he cannot abandon the brave regal lady to her enemies, Christian dares not give in to his traitorous body's desires. Yet how can he deny the passion that is rightfully his and the ecstasy that awaits him in Adara's kiss?

My Review:
I enjoyed reading this book so much! It was so entertaining, and amazing, and I just wanted to read more! I mean, this series is awesome, not to mention that it's written by Sherrilyn Kenyon, and yeah, I just loved reading it a lot!

I loved that opening, that she just went in there, and asked for a consummation of their marriage, because she's a Queen, and she's been dreaming of Christian being her husband since they were married, and yeah, I loved her later admittance that she had to get slightly intoxicated to be that bold!

And then there was her fool, Lutian, and how he pretended to be a fool so her father would let him stay with her, which is how a thief became close companions with a Queen. And then how Phantom is Velizarii, Christian's cousin, bastard born of the guy who killed their grandfather-because he was told that his dad, the cousin's grandfather, had raped Valizarii's mom. Yeah. Things are complicated!

I enjoyed this book so much, it was so good, and yeah, I can't wait to read the series again! Hopefully in the right order, next time, though!