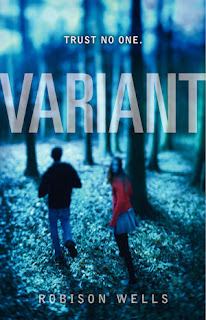 From Goodreads:
Benson Fisher thought that a scholarship to Maxfield Academy would be the ticket out of his dead-end life.

Now he's trapped in a school that's surrounded by a razor-wire fence. A school where video cameras monitor his every move. Where there are no adults. Where the kids have split into groups in order to survive.

Where breaking the rules equals death.

But when Benson stumbles upon the school's real secret, he realizes that playing by the rules could spell a fate worse than death, and that escape--his only real hope for survival--may be impossible.

My Review:
This book is basically a kid's nightmare. Being stuck at school. Like, being literally trapped there. Never being able to leave-except if you escape. But since this is a series, well, seems like it's going to be more complicated then that!

Benson came for a better life, not be be studied in whatever study/experiment is going on. So he gets there, and  he immediately wants out. And I could feel for him, who would want to be there, especially against their will?

The structure that they built, of the gangs, and the way they "bid" for chores, like this one show where people would bid for how much they were willing to work to transport something, with lower and lower payment. That was how this worked, but for chores instead of transporting stuff, so that was cool!

And oh, that ending! He got out, after a lot of loss-only to find out that he didn't really get far, and then others that he thought were dead, were still alive. So yeah, cliffhanger ending, and really can't wait to read more, to see how that's going to all play out!

Really enjoyed this book, it was just really fantastic, can't wait for the sequel!