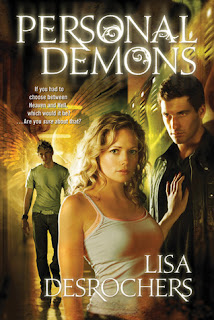 From Goodreads:
Frannie Cavanaugh is a good Catholic girl with a bit of a wicked streak. She has spent years keeping everyone at a distance---even her closest friends---and it seems as if her senior year is going to be more of the same . . . until Luc Cain enrolls in her class. No one knows where he came from, but Frannie can't seem to stay away from him.

What she doesn't know is that Luc is on a mission. He's been sent from Hell itself to claim Frannie's soul. It should be easy---all he has to do is get her to sin, and Luc is as tempting as they come. Frannie doesn't stand a chance. But he has to work fast, because if the infernals are after her, the celestials can't be far behind. And sure enough, it's not long before the angel Gabriel shows up, willing to do anything to keep Luc from getting what he came for. It isn't long before they find themselves fighting for more than just Frannie's soul.

My Review:
This was a really fantastic book! I enjoyed it so much, these characters, this world, it was just spectacular! And let's not forget the writing, too! This book just gave me a new author to watch, because wow, this book!

So the whole angel/demon thing, I have read before, but the way it was in this book, it's different, and while not 100% memorable, I think it's about 60% for me, though that's a rough estimate, and could be off! But I know that I'll be rereading it!

And Frannie has a pretty special ability, one that makes both Heaven and Hell want her. So they send their agents there. But both Luc and Gabe are guys, and Frannie's a girl, and a love triangle develops, one that feels real, because both guys appeal to different sides of Frannie!

Oh, that ending! I knew going in that this was a series, but oh, I just didn't expect that! Such a great ending to such an original plot, and one that makes sure that I'll have to check out the rest of the books in the series, and glad that I'm coming into it so late, because they're all out!

Really great, fantastic book, and I need to read more!