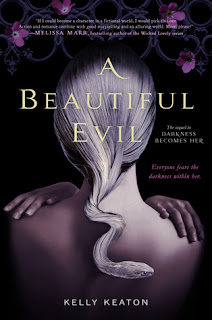 Myth and mayhem inhabit a richly reimagined New Orleans in this sequel to Darkness Becomes Her. After the epic graveyard battle at the end of Darkness Becomes Her, Ari and her friends know what they’re up against: Ari is facing the Medusa curse and is haunted by the image of what she will become. To make matters worse, the heinous goddess Athena has kidnapped young Violet and is threatening to destroy Ari.

Ari, along with the superhot Sebastian, is doing everything she can to learn more about Athena and to get Violet back. But the battle of good and evil is bigger than she realizes, and she’s about to be pulled into a world more horrific than she could ever imagine...

My Review:
This was an amazing, epic, awesome book! I loved going back into this world again, and I'm just so excited for the 3rd, and probably final, book! I just want more, and I want to see how it's going to end! Though I'm also sad for it to end!

So this book is just awesome! Yeah, it's a book, because there's conflict, with Athena kidnapping Violet, but then it's a book, so they also rescue her, and things happen, things are learned, and yeah, it was just so kick ass!

I enjoyed her and Sebastian, because yeah, it's been a while since I read the first book, and being in this world again, they were a constant, and I loved reading about them again! Plus that they are in this world, enough said!

That ending! What with the Zeus stone statue, him frozen, but with the hands cut off-because he was holding Athena's baby, which is the whole reason she's doing this? Yeah, that's a lot of fun! But yeah, they pretty much won in this book, and I can't wait to see how it's going to play out!

This was such a great book, I loved it so much, and now I just want to dive into this world again in the 3rd book now!