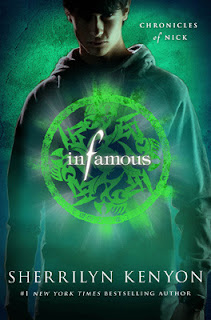 From Goodreads:
Go to school. Get good grades. Stay out of trouble. That’s the mandate for most kids. But Nick Gautier isn't the average teenager. He’s a boy with a destiny not even he fully understands. And his first mandate is to stay alive while everyone, even his own father, tries to kill him.

He’s learned to annihilate zombies and raise the dead, divination and clairvoyance, so why is learning to drive and keep a girlfriend so dang hard? But that isn't the primary skill he has to master. Survival is.

And in order to survive, his next lesson makes all the others pale in comparison. He is on the brink of becoming either the greatest hero mankind has ever known, or he’ll be the one who ends the world. With enemies new and old gathering forces, he will have to call on every part of himself to fight or he’ll lose everyone he cares about. Even himself.

My Review:
Oh, in how many words can I use to describe the amazing-ness that is Sherrilyn Kenyon's writing? The plots are developed in both the heart-pulsing action scenes to the heartening and heart breaking speeches that the characters have. And while Infinity might be my favourite CoN novel, this one was extremely good!

One big plot, was a website that was going on, and was posting lies about people. And it almost caused on of Nick's friends to kill herself. But he talked her down. And it also caused a dad to attack Nick-who didn't defend himself because of a promise he made to his mom. On the plus side, we got to met Bubba's mom, and learn more about him. On the negative side, Nick's in the hospital, and out of it. Not fun.

Another is his relationships. With Koda, with his mom, Caleb, and everyone else, yeah, there were developments just left and right, and yet they were natural, just showing what an incredible author Sherrilyn Kenyon is!

When we find out who the bad guy is-or rather, who is being used by the bad guy, it's just kinda sad. Because it's the daughter of the guy who beat up Nick, because the site said that he raped her. And since we know that didn't happen...yeah.

I just loved reading this book just so much, it was just really so good, and I can't wait for more books in this series!