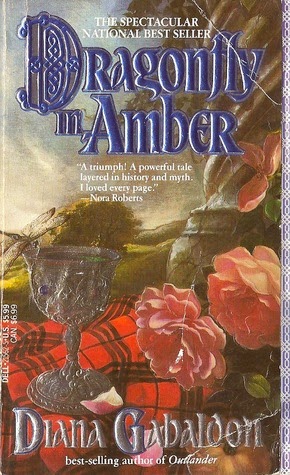 From Goodreads:
The second book of the Outlander saga... For twenty years Claire Randall has kept her secrets. But now she is returning with her grown daughter to Scotland's majestic mist-shrouded hills. Here Claire plans to reveal a truth as stunning as the events that gave it birth: about the mystery of an ancient circle of standing stones... about a love that transcends the boundaries of time... and about James Fraser, a Scottish warrior whose gallantry once drew a young Claire from the security of her century to the danger of his. Now a legacy of blood and desire will test her beautiful copper-haired daughter, Brianna, as Claire's spellbinding journey of self-discovery continues in the intrigue-ridden Paris court of Charles Stuart.

My Review:
So this was a really fantastic book! And like it says, it's a spellbinding tale, one in which while there was over 900 pages, and I read it in 2 days, and that time would've been less if I hadn't had a Thanksgiving dinner on the first day, and went to see The Maze Runner on the 2nd. Yeah. Because it was just so incredible, and I wanted to know what was going to happen next! to

So it starts off with Roger's POV, the nephew of the reverend that Frank was doing research with at the beginning of Outlander, the little boy that was there. Well, he's not a boy, seeing as it's 23 years later. And then Claire and her daughter, Brianna show up, and enlist him in finding out what happened to a list of men.

Because somehow, between the end of Outlander, and some time before this book starts, Claire came back to the 1940's. And the majority of this story is that time, the story leading up to her coming back. And it's a pretty heart-breaking tale!

There were a lot of intrigues, and lots of things happen, Jamie copies Charles' letters, to help his and Claire's cause to try and keep the battle where most of the Scotsmen die, and then their traditions are banned, from happening. Oh, and Claire gets a reputation for being a White Lady, seeing into the souls of men, and capable of destroying their privates, in both France, and Scotland, the rumours in France being started by Jamie, so he wouldn't be teased for not using a prostitute.

And there were some personal things, like Jamie promises to leave Black Jack alive for a year, so that a child could be created to be Frank's ancestor. And then he breaks that promise-for a good reason-and cuts off Black Jack's privates, which he so deserves, but don't fear-things turn out good for Frank being born!

But that breaking of the promise has some negative effects for Jamie and Claire. Because first she miscarries the baby, just as Jamie, as she thinks, kills Black Jack, which initially she blames Jamie for, but then really, it's just because it was a difficult pregnancy. And then to get Jamie out of prison for duelling, she has to gain favour from the King, which is supposed to be sex, but he uses her for her White Lady abilities, and then a quick sealing of the deal which was short, and well, yeah, just a few strokes, and then he goes and uses that for his mistress. So not fun for Claire, but it gets Jamie out so he can continue on with their plan!

OK, when Claire's resting after the miscarriage, and gets the note from Murtagh, the way it was written, "The hand is that of Monsieur Murtagh." I thought that meant it was Murtagh's severed hand, which would be gross and bad. Thankfully, it just means that it was written by him!

When I was going back to add some favourite lines, I reread over that Old Fox had claimed Jamie's men as part of his own, later on in the battle. Which sucks, because Jamie prevented that from happening at first, and then the Old Fox just slides it in. And I don't know if that's a good thing or a bad thing for the men listed!

When Jamie killed Dougal, well, I wish that Dougal had just a bit less headstrong-rush-into-things-without-all-the-facts mentality, to have let Claire and Jamie explain, instead of just barging in, calling Claire names, trying to kill her. It's not very nice!

That Roger is Gellis' and Dougal's number of great's, grandson, and Claire came back to Scotland in 1968, the year that Gellis said that she came from, well, yeah, that's hard on Roger-does he help send Gellis-or Gillian, as she's known before she goes-to her fiery death after 10 years in the past, or keep her in the present, and have himself probably not exist? That's a hard thing to deal with!

It's song is Pompeii by Glee Cast, because I just started lisening to it when I was reading this book, and yeah, I just put it on repeat, and listened to it non-stop while reading this book! I mean, it's a great song, and nice to listen to it, and yeah!

This was just such a fantastic book! And such a compelling story, and while it's enormous, it's just the kind of book that I just adore to bits!