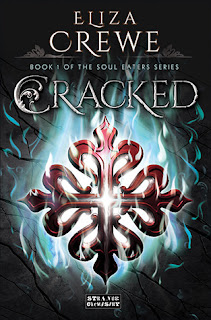 Well, technically, she eats their soul. But she totally promises to only go for people who deserve it. She's special. It's not her fault she enjoys it. She can’t help being a bad guy. Besides, what else can she do? Her mother was killed and it’s not like there are any other "soul-eaters" around to show her how to be different. That is, until the three men in suits show up.

They can do what she can do. They're like her. Meda might finally have a chance to figure out what she is. The problem? They kind of want to kill her. Before they get the chance Meda is rescued by crusaders, members of an elite group dedicated to wiping out Meda's kind. This is her chance! Play along with the "good guys" and she’ll finally figure out what, exactly, her 'kind' is.

Be careful what you wish for. Playing capture the flag with her mortal enemies, babysitting a teenage boy with a hero complex, and trying to keep one step ahead of a too-clever girl are bad enough. But the Hunger is gaining on her.

The more she learns, the worse it gets. And when Meda uncovers a shocking secret about her mother, her past, and her destiny… she may finally give into it.

My Review:
This book was pretty hilarious! I loved Meda's voice, it was just awesome, and dark and entertaining! This wasn't your goody two shoes heroine, but you couldn't help by like Meda, because she knew she wasn't good, and worked with it!

Absolutely loved this world! The details of the two groups, and how that all worked! And we learned more details as things went on, because hey, it's ever evolving! We learned as she learned, and yeah, it was fascinating!

These characters were just fantastic! They were smart, and weird, and they had their flaws! Because of their heritage, they haven't grown up like other kids, and they proved that over and over, like the fake food thing! Loved that!

That ending had a lot of ups and downs! The death, and the completion of the ritual thingy, and her dad, yeah, those were all really big things. And telling her friends that she's half demon. Yeah. That was a pretty big ending!

Loved this book so much, it was so freaking great, and I can't wait to read more of this series!