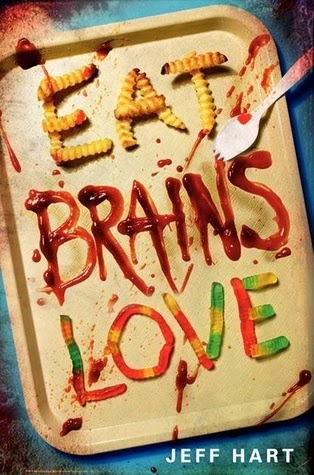 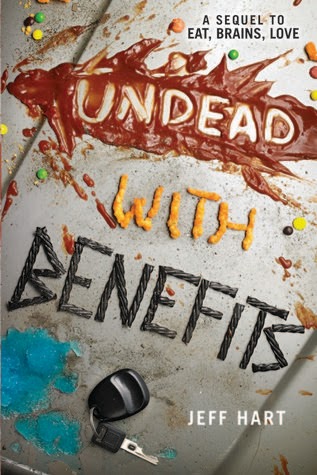 From Goodreads:
Two teenage zombies search for brains, love, and answers in this surprisingly romantic and laugh-out-loud funny debut novel with guts.

Jake Stephens was always an average, fly-under-the-radar guy. The kind of guy who would never catch the attention of an insanely popular girl like Amanda Blake-or a psychic teenage government agent like Cass. But one day during lunch, Jake's whole life changed. He and Amanda suddenly locked eyes across the cafeteria, and at the exact same instant, they turned into zombies and devoured half their senior class.

Now Jake definitely has Amanda's attention-as well as Cass's, since she's been sent on a top-secret mission to hunt them down. As Jake and Amanda deal with the existential guilt of eating their best friends, Cass struggles with a growing psychic dilemma of her own-one that will lead the three of them on an epic journey across the country and make them question what it means to truly be alive. Or undead.


Eat, Brains, Love is a heartwarming and bloody blend of romance, deadpan humor, and suspense that fans of Isaac Marion's Warm Bodies will devour. With its irresistibly dry and authentic teen voice, as well as a zombie apocalypse worthy of AMC's The Walking Dead, this irreverent paperback original will leave readers dying for the sequel that's coming in Summer 2014.

From Goodreads:
The living dead are living it up in this hilarious and surprisingly romantic sequel to Eat, Brains, Love, which Kirkus Reviews called "one hell of a road trip...funny, gross, and scary in equal, alternating measures."

Jake and Amanda are in love, on the run—and undead. They've teamed up with Cass, who’s ditched her former job as shady government psychic zombie-tracker, and they're headed across the border into Iowa, where there’s rumored to be a zombie cure.

Armed with a trunk full of guinea pigs (aka zombie snacks), they're ready to take on the Midwest's first undead warlord, the psycho psychic out for their blood, and their own superawkward love triangle. But the virus is spreading faster than you can say "zombie apocalypse," and Jake, Amanda, and Cass have to find the cure—if it even exists—before the whole state of Iowa goes up in flames.

With its heartwarming blend of guts, romance, and spot-on teen humor, this road trip–ready paperback original is perfect for fans of Isaac Marion's Warm Bodies and AMC's The Walking Dead. Readers will devour Jeff Hart's fresh, funny, and irreverent take on love and life (well, unlife) in an eat-or-be-eaten world.

My Review:
These books were so fantastic! And so funny, because of the tone of voice! I just loved reading them! Of course, Undead With Benefits was darker than Eat, Brains, Love, but the situation was, too. So that was so great to read!

I really enjoyed the narration! We had Jake the zombie, and Cass the clairvoyant. We saw both sides of the story, of zombie and human, fugitives and government. It added balance to the story, and was just a great choice to make in terms of writing and editing these books!

Things go from bad to worse, because hey, it wouldn't be a good book series if things didn't go sideways! And things get bigger, and more dangerous. I enjoyed watching these characters deal with everything, from becoming zombies, to looking for a cure while being hunted. It was so great!

Loved the ending! I honestly would love a 3rd book in this series, but since it's been 2 years, I think it's unlikely. Things were left up in the air, but overall, are looking much better! There's hope for the future, and that was really great!

So enjoyable to read these books, they were just hilarious!