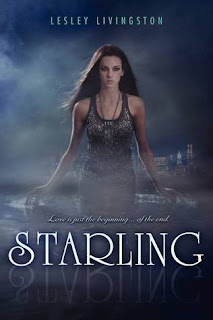 From Goodreads:
Mason Starling is a champion fencer on the Gosforth Academy team, but she's never had to fight for her life. Not until the night a ferocious, otherworldly storm rips through Manhattan, trapping Mason and her teammates inside the school. Mason is besieged by nightmarish creatures more terrifying than the thunder and lightning as the raging tempest also brings a dangerous stranger into her life: a young man who remembers nothing but his name--the Fennrys Wolf. His arrival tears Mason's world apart, even as she feels an undeniable connection to him. Together, they seek to unravel the secrets of Fenn's identity as strange and supernatural forces gather around them. When they discover Mason's family--with its dark allegiance to ancient Norse gods--is at the heart of the mystery, Fennrys and Mason are suddenly faced with a terrifying future.

My first review of Starling
My Review:
Reading this book again-after reading the first trilogy not long ago-was just fantastic! I loved connecting the dots, of these series coming together, linked by more than Fennrys. But I'm hoping that there'll be more connections in the next two books!

Mason was just awesome! She was a part of this ultra family, and had the best of everything, and she wasn't awful about it. And while she did have her flaws, and her phobias, well, she had a reason for them, and I really enjoyed reading about her!

Knowing what Fennrys did, and why, made reading this book just the bit more deeper. We didn't really get to know him before, and in this book, he started to learn about himself, us along with him. It was just so great to read!

That ending was just as evil as it was last time, but this time, it was soothed by the fact that I'm going to be reading the next two books in this trilogy, and I won't have to deal with leaving these characters on the cliff! Yeah!

This book was so great, and I can't wait to read the rest of this series!