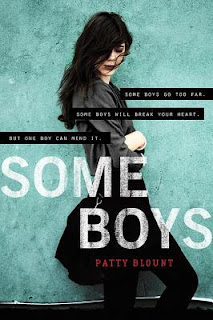 From Goodreads:
Some girls say no. Some boys don't listen.

When Grace meets Ian, she's afraid. Afraid he'll reject her like the rest of the school, like her own family. After she accuses Zac, the town golden boy, of rape, everyone turns against her. Ian wouldn't be the first to call her a slut and a liar.

Except Ian doesn't reject her. He's the one person who looks past the taunts and the names and the tough-girl act to see the real Grace. He's the one who gives her the courage to fight back.

My Review:
This book was utterly fantastic to read! I loved to hate the subject matter-of rape, and how boys get away with it, that "boys will be boys" or athletes are deemed more important then the victims, and it either isn't believed, or it's swept under the rug. And it's very infuriating!

We knew something had happened. The synopsis tells us that. But Grace kept the whole story from us, and revealed bit by bit, until we had everything, and it wasn't a pleasant story. It sounds like it has-and will-happen, and with the way that society is, that it won't change anytime soon. Which is pretty horrible.

Grace and Ian were really interesting together. She was raped by his best friend-when she was interested in Ian. And that if Ian had gotten to the party earlier, it might not have happened. Yeah, they had an interesting dynamic!

When everything came out, that Zac was lying and manipulating things, there was a sense of relief-that things were righted, though not as much as they could've been, but were better than they had been. So it was a pretty great ending!

I enjoyed this book so much-I made a lot of aggravation sounds-and I need to read more by Patty Blount!