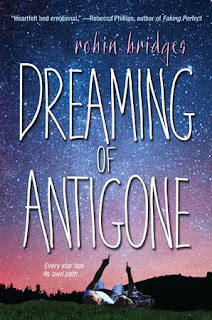 From Goodreads:
Every star has its own path…

"I can't ever be the blazing star that Iris was. I'm still just a cold, dark satellite orbiting a star that went super nova."

Andria's twin sister, Iris, had adoring friends, a cool boyfriend, a wicked car, and a shelf full of soccer trophies. She had everything, in fact—including a drug problem. Six months after Iris's death, Andria is trying to keep her grades, her friends, and her family from falling apart. But stargazing and books aren't enough to ward off her guilt that she—the freak with the scary illness and all-black wardrobe—is still here when Iris isn't. And then there's Alex Hammond. The boy Andria blames for Iris's death. The boy she's unwittingly started swapping lines of poetry and secrets with, even as she tries to keep hating him.

Heartwrenching, smart, and bold, Dreaming of Antigone is a story about the jagged pieces that lie beneath the surface of the most seemingly perfect life…and how they can fit together to make something wholly unexpected.

My Review:
This book was really fantastic! It was sad, but there was also a sense of hope, too! This is the second of Robin Bridge's contemporary YA books that I've read, and I'm pretty sure that it was the first to be published, and yeah, I really enjoyed it!

Andria was interesting. She was the weaker sibling of the two, because of her medical history. And yet, Iris is the one that died. And it's hard for her to deal with it. She shouldn't have had to. But it wouldn't be a very good book if it didn't echo real life-things aren't fair.

I loved her star-gazing, and her connection with Alex, and how there's a push-pull tug between them. Because he dated Iris. And the drug thing. Which made things complicated, but didn't stop the things growing between them!

It was sad and aggravating to find out what had happened! That he would do that, to his step-daughter, was repulsive. And that Iris felt that she couldn't speak up, was just horrible. So yeah, I really enjoyed how things ended!

This book was just so fantastic, and I can't wait to read more by Robin Bridges!