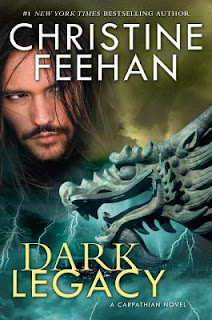 From Goodreads:
In a thrilling Carpathian novel from #1 New York Times bestselling author Christine Feehan, a woman fights to free herself from the grip of the vampire trying to possess her...

In a beautiful compound hidden away from the world, Emeline Sanchez tries to blunt the pain that has wracked her body ever since her terrifying ordeal in the labyrinth beneath the city--when she was forced to exchange blood with an evil master vampire.

Now, it's his voice that haunts her...that calls to her in the dark...that never lets her rest. And while the children that she helped to free from his clutches struggle to heal, watched over by their Carpathian protectors, Emeline knows one thing: She must sacrifice herself to keep them all from harm...

For her beauty is irresistible to the vampires, her psychic ability like a drug. Whipped into a frenzy, they'll never stop coming for her. And only the taste of one Carpathian warrior--the rush of his blood--can save her...

Loved reading this book, so much! Both of them are very strong-in different ways. She underwent torture by the bad guy, knowingly, to save the kids, and is dealing with so much. And he's been without his light for so long, he was in the Monastery. So yeah, they were a great couple! And as was pointed out, each couple is unique, and each have to find the way that they fit together. Emaline is not a warrior woman like Blaze, but she's not a mouse, either. Just so fantastic!

There were a lot of developments in this book! Like Emaline's ability, and how far reaching it is, and how useful. There were also the power struggles within the vampires, and a few secrets were revealed that'll change this world! So awesome!

Man, I'm so looking forward to the next book in this series! There's so many directions it could go in, and so many couples it could be, both known and unknown, and developing future couples like Liv and Val, but she's only 10. So a ways away, but they can still get to know each other and such!

Such a great book, and I an now going to wait impatiently for the next book in this wonderful series!