Week 35 Review: Into the Night 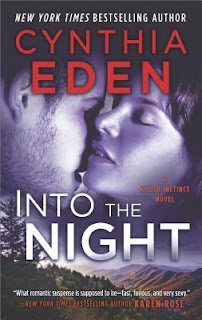 Sheltered in the shadows of the Smoky Mountains is the suspect who's summoned FBI agent Macey Night's fears to the surface. Every day that the "Profiler," a vigilante serial killer, escapes justice is another day she's reminded of what it is to be a ruthless predator's prey. Capturing him is a craving deeper than anything she's felt in a long time. But Agent Bowen Murphy, equal parts sexy and volatile, seems hell-bent on changing that. Working together—needing, living, and breathing each other—they're entwined to distraction.

Bowen's used to operating on impulse: act, don't feel. Now Macey and the controlled terror behind her beautiful eyes has him rethinking everything, including his rule to never get close to a colleague. He's willing to fight for a future with Macey, but the consequences of love could be deadly.

My Review:
Wow, this book was just fantastic! I enjoyed it so much! I've enjoyed this series so much, and I was so glad that we got another book! We did meet Macey in Before the Dawn, but it was in this book that we actually got to know her better!

We had the story of why she fit with this team of people who have a special connection to or insight into killers. In Macey's case, it was because she was a victim. She survived, but she has some scars from that time. Which sucks.

I really enjoyed Bowen, he was a great character, and I really enjoyed his connection with Macey. They started a really amazing relationship, and reading about the two of them was just great! While they were colleagues, that didn't mean they couldn't fit together.

The mystery in this book was awesome! All of them have in this series, this bad guy was kinda pretty awful! The number of people he was killing, wow. Not acceptable at all! So I was glad how everything worked out, that was a satisfying ending!

Really amazing book, and I'd love a 4th book and more!