Week 48 Review: The Art of Starving 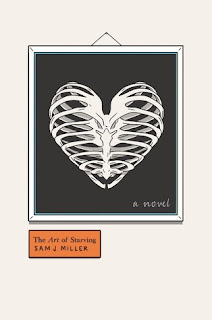 From Goodreads:
Matt hasn't eaten in days. His stomach stabs and twists inside, pleading for a meal, but Matt won't give in. The hunger clears his mind, keeps him sharp—and he needs to be as sharp as possible if he's going to find out just how Tariq and his band of high school bullies drove his sister, Maya, away.

Matt's hardworking mom keeps the kitchen crammed with food, but Matt can resist the siren call of casseroles and cookies because he has discovered something: the less he eats the more he seems to have . . . powers. The ability to see things he shouldn't be able to see. The knack of tuning in to thoughts right out of people's heads. Maybe even the authority to bend time and space.

So what is lunch, really, compared to the secrets of the universe?

Matt decides to infiltrate Tariq's life, then use his powers to uncover what happened to Maya. All he needs to do is keep the hunger and longing at bay. No problem. But Matt doesn't realize there are many kinds of hunger…and he isn't in control of all of them.

A darkly funny, moving story of body image, addiction, friendship, and love, Sam J. Miller's debut novel will resonate with any reader who's ever craved the power that comes with self-acceptance.

My Review:
I really enjoyed this book! It's different, with someone who has issues with food developing superpowers. Add in that it's a boy, well, yeah, that's not something I've read before. In my head, I know that both boys and girls have issues, but usually all I see is girls, you know?

I had a bit of a hard time reading this book. I'm bigger, and I do have body image issues. But unlike Matt, I know what I look like, he has the thing where he thinks he's bigger then he is. And I don't know what's harder on the body-too little of what it needs, or too much that it doesn't?

So Matt has a mission, basically to ruin the life of the person he believes is responsible for his sister running away. Someone that both siblings had a crush on-Tariq. And Matt hones his abilities while cutting down on what little he consumes. You had to know things would crash.

Loved that ending, with a bit of an explanation about their family, and that Matt would work on being healthy. But also, that he still had his superpowers, which makes me think that the reason they wouldn't work when he had something to eat during the book was because he thought they wouldn't work. Cool!

This book was really awesome, and I really enjoyed reading it!