Flame in the Dark: Review and Excerpt 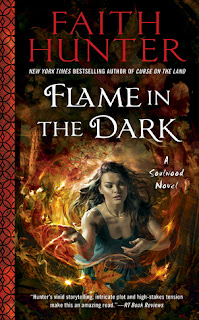 Nell Ingram has always known she was different. Since she was a child, she's been able to feel and channel ancient powers from deep within the earth. When she met Jane Yellowrock, her entire life changed, and she was recruited into PsyLED—the Homeland Security division that polices paranormals. But now her newly formed unit is about to take on its toughest case yet.

A powerful senator barely survives an assassination attempt that leaves many others dead—and the house he was visiting burns to the ground. Invisible to security cameras, the assassin literally disappears, and Nell's team is called in. As they track a killer they know is more—or less—than human, they unravel a web of dark intrigue and malevolent motives that tests them to their limits and beyond.

My Review:
Yeah, another book in this series! I really hope we get a 4th one*, because I'm really enjoying this series and these characters! The mysteries are intriguing, and this world, I just absolutely love being in it!

I really enjoy being in Nell's head. She has a different way at looking at things, and I enjoy seeing things how she does! One great thing for this book, is we learn more about what she is, and how to help avoid her sister facing a similar fate by learning from her mistakes, so that was really awesome!

The mystery in this book was really intriguing! That the guy basically disappeared, that he left a trail of dying things in his wake, it doesn't add up to anything good! This family just doesn't have any luck, having all this death and destruction follow them! The mystery was a fantastic element of this book, and I absolutely loved it! We got a bit more of this world and the Arcinels, so that was just great!

I really enjoyed how things ended, because facing the bad guy wasn't as close to the end as other books! There was one plotline that's been carried across all 3 books, and it's kinda a two-parter-the church guy she feed to her land, and the vampire tree. And I loved how she dealt with both! Oh, and her relationship with Occam, it takes a definite turn to somewhere it's been hinting since the beginning! It made the ending so satisfying!

This was such a great book, and I can't wait for Nell's next adventure, and Jane's next one, too!

*I knew this, have since January, but I forgot, that Soulwood is going to be a 5 book series at least! Yeah!


Excerpt:
"Ten-ninety-ones are to stay in place until CSI and the MEs are finished."

Ten-ninety-ones were dead bodies, in Knoxville PD radio codes. The stink of gunfire and burned hair and scorched building fouled the air. I looked around for fire trucks and decided they trucks must have pulled up to the restaurant from the back, from the street on the other side. EMS units were lined up in the roadway, uniformed officers standing guard at the door to the restaurant, visible in the glaring headlights. Heavily armed SWAT officers were inside and out. Shadows flickered on the walls and the asphalt, oversized, bulked, armed.

"Over here." The uniformed cop jerked on my sleeve, pulling me against a marked vehicle. She pointed to a black limo across the street. "In that one." It wasn't a long limo, but a short one. The vehicle looked heavy, as if armored. "Don't expect me to get any closer to the fangheads," she said.

"I like the blood in my veins where it belongs. Maintain cover position until we clear the street and the buildings."

"Thanks," I said, "and I feel the same way about vampires. But you don't say no to Ming of Glass." 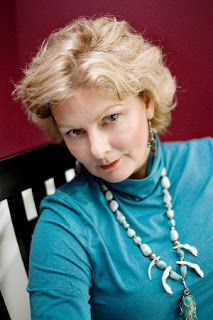