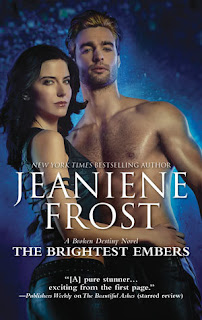 From Goodreads:
You can run from your destiny, but you can't hide

Ivy thought that she and Adrian had conquered their fates. Yet with thousands of innocents still trapped in the demon realms, she's determined to locate the final hallowed weapon and harness its unparalleled power to free them. But the last relic nearly put Ivy in the grave—there's probably no coming back from this one.

Adrian's dark lineage has made him the most powerful of his kind, yet even his incredible abilities might not be enough now. Instead, the treacherous fate he has fought so hard to escape might be the only way he can save Ivy. Their scintillating bond has been tested before, but never with so much on the line. Now fate will come head-to-head against true love, and nothing they've endured can prepare Ivy and Adrian for the unthinkable choices they'll face...

My Review:
I absolutely loved reading this book! I mean, this series has just been incredible, and I just wanted to know how it would end! There were a few things up in the air-that Adrian betrayed Ivy to save her and wondering when she'd find out, and finding the 3rd and final holy object. Yeah.

There was one short scene that in the grand scheme of things in this series, wasn't of utmost importance that I really liked. They're staying at a ice hotel, and they meet this couple, and when Zach joins them, the couple make racist comments, and I loved how both Zach and Ivy shut them down! I mean, you just dissed an angel, however unknowing of his origins, because you're racist. They're fighting the big evil of demons, but they also fought this one, too!

Ivy kinda flip flops with finding the 3rd item, or at least, when to bond to it. Because she finds out she's pregnant, and yeah, that's a pretty big deal! And when she touches the 3rd item, she'll most likely die. And she doesn't want to do that to her kid. But Zach shows her why it's important that she continue on, even if there's a high cost!

Loved the ending! I do wish that it'd been just a little bit longer, because hey, we just spent 3 books finding this happy ending, and it just ends right away after the big issues were resolved, really well, even if there was a cost! I want more, darn it!

This book was just so amazing, and I loved reading it!