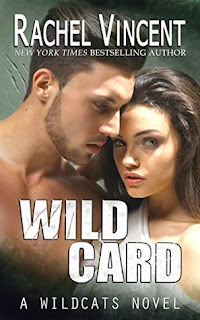 From Goodreads:
Kaci Dillon is a man-eater.

She's grown up on the fringes of shifter society, hearing the whispers. One desperate act as a starving, terrified child has made her the first tabby in history with no romantic prospects. But whatever. Eighteen is too young to get married anyway. Still, when she stumbles upon an opportunity to get away for a few days, who could blame her for seizing it?

Confined to the South-Central territory, awaiting trial for crimes he committed as a traumatized, newly infected stray, Justus has discovered that the tribunal already intends to vote for the death penalty. He has no choice but to run. Too young to touch the trust fund that could finance his escape, he's betting on a big win at the poker tables—until Kaci, his secret crush, catches him sneaking out and demands that he take her with him to Las Vegas

After a wild night she can't remember, Kaci wakes up with a ring on her finger, next to a young billionaire who can't access his fortune until he turns twenty-five—or ties the knot. If she can keep her hands off her hot, charismatic new groom, she can have their unconsummated marriage annulled. But can she really abandon Justus to his death sentence, just to undo her own mistake?

My Review:
Yeah, another book in this series! I'm really enjoying this spin off series, and all these new characters and developments in the world! That this book stars Kaci, the first who had both parents who were descended from shifters and became one herself, and then Justus who got dragged into this world and doesn't have much hope given his actions in the previous book which have a good explanation!

Unlike the previous books, there's not so much explicit romance. There is romance, but it's more behind closed doors. Which works for this book, because yeah, they are on the younger side, compared to the other stars of the previous books!

A lot of moments in this book, really had my blood pressure up! Like, how could they be treated like that? It was just so awful and unfair and I just wanted to rage against all the wrongs that were committed against them! But that just shows a well written book! And one that was so great to read!

There was a lot of politics in this book! Like, deals to keep Justus alive. And yeah, there was a lot of plotting! That they were being used to exact revenge on the one leader, yeah, that was pretty awful! But they turned the tables on him, so that was really great!

I absolutely loved this book, and I can't wait for more!