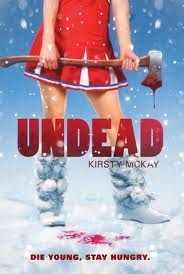 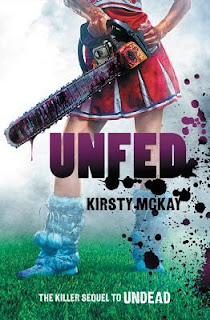 From Goodreads:
Out of sight, out of their minds: It's a school-trip splatter fest and completely not cool when the other kids in her class go all braindead on new girl Bobby.

The day of the ski trip, when the bus comes to a stop at a roadside restaurant, everyone gets off and heads in for lunch. Everyone, that is, except Bobby, the new girl, who stays behind with rebel-without-a-clue Smitty.

Then hours pass. Snow piles up. Sun goes down. Bobby and Smitty start to flirt. Start to stress. Till finally they see the other kids stumbling back.

But they've changed. And not in a good way. Straight up, they're zombies. So the wheels on the bus better go round and round freakin' fast, because that's the only thing keeping Bobby and Smitty from becoming their classmates' next meal. It's kill or be killed in these hunger games, heads are gonna roll, and homework is most definitely gonna be late.

From Goodreads:
Fresh meat! From a hospital of horrors to a runaway zombie train, it's an all-new onslaught of the slavering undead in the sequel to Kirsty McKay's killer debut!

Just when you think you're out...it's the morning after the night of the return of the living dead. Or something like that. After running/bus-driving/snowboarding for her life alongside rebel Smitty, geeky Pete, and popular Alice, Bobby thought she'd found the antidote to the Carrot Man Veggie Juice that had turned the rest of their classmates into zombies. When Smitty (mmm...nom, nom) got chomped, Bobby pumped a syringe full of it into him herself.

But now Bobby's a prisoner in some hospital of horrors, with no clue how she got there. And Smitty is missing. What if he isn't cured after all? Bobby knows she's got to find him, even if it means facing Scotland's hungry hordes -- plus Alice's buckets of snark -- again. And this time, zombies aren't the only evil stressing her out. The brain-dead are bad enough, but how can Bobby stop the big pharma business behind the epidemic? Especially when her own mom works for the company?

My Review:
I loved reading these books! I loved Undead the first time I read it, it was just so epic, and to have a sequel, yeah, I just had to read them both together! Bobby and Smitty are awesome, and I loved reading their adventures!

I had forgotten a lot about Undead, but I remembered the bus and Carrot Man. While these books are horror what with the zombies and the collapse of civilization, there was a lot of humour, in the situation, and in the snarking, especially with Bobby, Smitty, and Alice!

It was weird, in a way, to read Unfed. Undead took place in a pretty small area and in not a lot of time. And Unfed was in a different place. So yeah, that was weird! That doesn't mean it wasn't an awesome book, it was. It was just so strange!

It was interesting to watch them deal with a bit of civilization and then to deal with more zombies. Because of course the bad guys are trying to make the zombies into a money maker! There was a lot of antics and twists and surprises, and I loved how it all turned out! That was slightly unexpected, but it was a great ending!

Loved reading these books, they were just so fantastic!