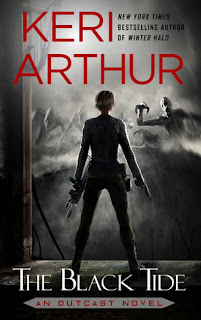 From Goodreads:
Though Winter Halo - the pharmaceutical company behind the evil experimentation on both children and adults - has been destroyed, the danger is far from over. Not only do seven children remain unaccounted for, but some of the vampires are now able walk in light.

The key to stopping the unthinkable lies in finding Ciara Dream, the last member of the trio behind the plot to give full light immunity to both the vampires and the Others. But Ciara, like Tiger herself, is a shapeshifter, able to take on any human form she desires.

To find her, Tiger will need to use every skill in her formidable arsenal, and even that might not be enough to save the city and the people she has started to care about.

Because the vampires are coming, and this time, the lights won't stop them.

My Review:
Oh, man, this book was absolutely amazing! This series has been so great, and it was so epic to read the end of it! The beginning kinda just threw us into the action, and things didn't slow down from there! Such a great read!

There were a few plot lines to follow. There's Ciara and finding her and thwarting her plans. There's finding Jonas niece. Oh, and the conflict with Branna played out, and while it had a cost, it was worth it in the end, because it helped her go through the tears!

This is the book, I think, where she spends the most time in the city. Mostly because of her connection to the important politician dude because of his connections. Because the plan of Ciara is pretty big and bad!

Loved how it all played out! The trial, and then the big fight, yeah, that was really intense! I'm glad that Tiger got her home all legal, so no one can take it from her, that was a really great ending! And with Jonas, too!

This book was just spectacular, a great ending to a wonderful series! I loved it!