Week 52 Review: Here We Are Now 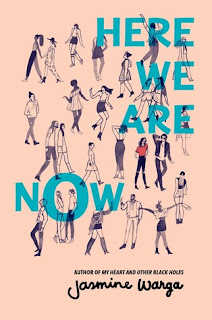 From Goodreads:
A book about love, loss, and the power of music, perfect for fans of Nick Hornby and Fangirl.

Taliah Sahar Abdallat lives and breathes music. Songs have always helped Tal ease the pain of never having known her father. Her mother, born in Jordan and very secretive about her past, won't say a word about who her dad really was. But when Tal finds a shoebox full of old letters from Julian Oliver—yes, the indie rock star Julian Oliver—she begins to piece the story together.

She writes to Julian, but after three years of radio silence, she's given up hope. Then one day, completely out of the blue, Julian shows up at her doorstep, and Tal doesn' know whether to be furious or to throw herself into his arms. Before she can decide, he asks her to go on a trip with him to meet her long-estranged family and to say good-bye to his father, her grandfather, who is dying.

Getting to know your father after sixteen years of estrangement doesn't happen in one car ride. But as Tal spends more time with Julian and his family, she begins to untangle her parents' secret past, and discovers a part of herself she never recognized before.

By the acclaimed author of My Heart and Other Black Holes, this is an intergenerational story of family and legacy and the way love informs both of those things. It's about secrets and the debt of silence. It's about the power of songs. And most of all, it's about learning how to say hello. And good-bye.

My Review:
This book was so fantastic! I loved reading Tal's story, inter-spaced with the story of her parents when they were just a little bit older than her. It was such a captivating story, and I loved that back and forth!

I think a lot of girls dream of having a famous dad. The reality, I'm sure, is harder then dreams, but the dream is pretty powerful. And while Tal has the reality, well, her dad has never acknowledged her before. Until he shows out of the blue because his dad is dying. Awkward!

I loved watching Tal and her dad and his family interact, of finding those connections, because they are family. And that they knew her mom, that was just interesting, but we got to see it play out, which was just so great!

There were hard moments, because yeah, her grandfather that she just met is dying. And her mom didn't want her to know who he was, but Tal found out anyways. But that ending was pretty great, o family and togetherness and was just so sweet to read!

Yeah, this book was just incredible and I loved reading it!

Author: Jasmine Warga
Read: December 27th, 2017
Source: Edelweiss
Reason Why: Enjoyed her other book and this one sounded good, and it's a SAC 2017 Book and a Sophomore Challenge Book!
Publisher: Balzer + Bray
Published: November 7th 2017