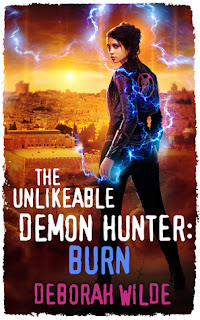 From Goodreads:
It's the End of the World as We Know It…

Nava has come a long way from being a hot mess flying solo. She's now one of the major players on the chessboard, leading the charge against a witch with dark magic, a power-mad rabbi, and the impending apocalypse.

Friends will die and secrets will be exposed. Add imprisonment, torture, and the biggest, baddest demon of them all who has plans for her, and it's a lot for a girl to take in.

Time to rally the troops and make her last stand, because she's damned if she'll let the end of the world get in the way of her romantic, sexytimes galore, happily-ever-after.

It's trial by fire.

The heart-pounding final installment to the series.

My Review:
Wow, this book was just amazing! Nava was in a horrible place in the end of the previous book, so yeah, I was just itching to read this book! And it didn't disappoint, and we got so much in a short period of time, though it wasn't all sunshine and roses.

There were two main threats in this book, like the previous one. There's the evil rabbi dude, and there's the morally questionable witch. Which means a lot of balls to juggle. Oh, and then there's the whole Lilith thing going on, which threw a curve ball.

It's funny, to bring everybody together, they all had different reasons to want to work with one group, but not all of them. So it was an interesting time to bring them all together. And they needed to, each group had different information that helped in the end!

Absolutely loved the ending! It was something of a two parter climax, and they basically went from one to the other. It was pretty clever, what they had planned, the good guys. And there were a few twists and emotional moments in the end. It worked out in a spectacular way that I loved reading!

Loved reading this book so much, it was a really satisfying end to Nava and Rohan's arc, and I'm so glad that we're getting a Leo book!