Week 13 Review: And She Was 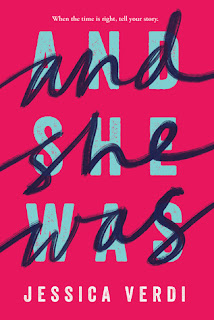 From Goodreads:
Dara's lived a sheltered life with her single mom, Mellie. Now, at eighteen, she's dreaming of more. When Dara digs up her never-before-seen birth certificate, her world implodes. Why are two strangers listed as her parents?

Dara confronts her mother, and is stunned by what she learns: Mellie is transgender. The unfamiliar name listed under "father"? That's Mellie. She transitioned when Dara was a baby, shortly after Dara's birth mother died.

But Dara still has more questions than answers. Reeling, she sets off on a road trip with her best guy friend, Sam. She's determined to find the extended family she's never met. What she discovers—and what her mother reveals, piece by piece over emails—will challenge and change Dara more than she can imagine.

From rising star Jessica Verdi, this is a gorgeous, timely, and essential novel about the importance of being our true selves.

My Review:
This book was really fantastic to read! I most enjoyed Mellie's emails that detail her story, as a child with an uncomfortable family life, to her time with Dara's birth mother, and her transition. I did enjoy Dara and Sam, but I did skim the middle of Dara's narration because it wasn't as interesting to me.

I can see both sides of the story, Mellie in a place of fear and inertia, and Dara being furious about secrets being kept from her. And I can understand why Dara needs to go out and meet her birth mother's family, she probably should've done a bit of research before hand.

Mellie has had it tough. She's trans, and she was born to a strict family who kicked her out because they were awful. Then there was Dara's birth mom, who didn't understand what it meant for Mellie to be trans, and then she died. But the story doesn't end there!

Dara has a lot to discover about herself on this journey. She was accepting of the truth-just not the fact that she was lied to for so long. And going on this journey with Sam was the best thing that could happen to her. Oh, and her grandparents were nice to her, but they also had very awful views! Didn't like them once I learned that!

Really enjoyed this book, it was a really great read!