Week 13 Review: If I Was Your Girl 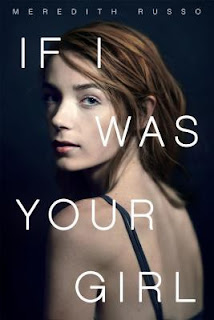 From Goodreads:
A new kind of big-hearted novel about being seen for who you really are.

Amanda Hardy is the new girl in school. Like anyone else, all she wants is to make friends and fit in. But Amanda is keeping a secret, and she's determined not to get too close to anyone.

But when she meets sweet, easygoing Grant, Amanda can't help but start to let him into her life. As they spend more time together, she realizes just how much she is losing by guarding her heart. She finds herself yearning to share with Grant everything about herself, including her past. But Amanda's terrified that once she tells him the truth, he won't be able to see past it.

Because the secret that Amanda's been keeping? It's that at her old school, she used to be Andrew. Will the truth cost Amanda her new life, and her new love?

Meredith Russo's If I Was Your Girl is a universal story about feeling different—and a love story that everyone will root for.

My Review:
This book was a really fantastic read, and one I hope has a positive impact in the lives of other trans teens and the people in their lives. Apparently things were simplified, like Amanda easily looking female, which isn't always the case, but otherwise a fairly realistic representation of being trans.

Amanda has had it rough. She was always preferring female things, she didn't fit in as a boy. She wasn't, and it wasn't until things came to a head that she came out. Lesson, that it might not safe to come out as whoever you are, but at least try to find yourself, know yourself.

She has a bit of a fresh start going to live with her dad, but there's plenty of conflict there because part of the reason why her parents got a divorce was them fighting over her. And that put them in a bit of an awkward situation.

I did enjoy the romance, but there's this one moment that was just hard to read, when his mom was just reacting and pretty darned horrible. And after the night that Amanda had been having, that was just wasn't what she needed at the moment.

Yeah, I really enjoyed reading this book, it was incredible!