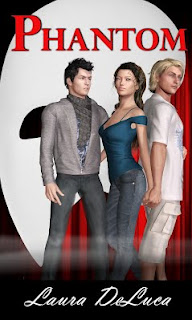 From Goodreads:
The "Phantom" was a musical phenomenon that Rebecca had always found enchanting. She had no idea that her life was about to mirror the play that was her obsession. When her high school drama club chooses "Phantom" as their annual production, Rebecca finds herself in the middle of an unlikely love triangle and the target of a sadistic stalker who uses the lines from the play as their calling card.

Rebecca lands the lead role of Christine, the opera diva, and like her character, she is torn between her two co-stars—Tom the surfer and basketball star who plays the lovable hero, and Justyn, the strangely appealing Goth who is more than realistic in the role of the tortured artist.

Almost immediately after casting, strange things start to happen both on and off the stage. Curtains fall. Mirrors are shattered. People are hurt in true phantom style. They all seem like accidents until Rebecca receives notes and phone calls that hint at something more sinister. Is Justyn bringing to life the twisted character of the phantom? Or in real life are the roles of the hero and the villain reversed? Rebecca doesn't know who to trust, but she knows she's running out of time as she gets closer and closer to opening night. Only when the mask is stripped away, will the twenty first century phantom finally be revealed.

My Review:
I really enjoyed this book! It had truly fantastic characters, with a twist at the end for the bad guy, well, just fantastic!!!! Really awesome, and well plotted, and yeah, it was just a really enjoyable and awesome book to read!

I haven't seen the play, but my mom had the tapes of the songs, and so we listened to them on long car rides. But it's been a long time since that, and my memory is extremely bad. But this was about a school putting on the production, while events that are the modern day equivalent of the play's are happening. Which was pretty creepy and epic for us readers!

I really, really enjoyed the comparisons that were made between the play, and the real life happenings. Because yeah, it was kinda like they were under siege, which was pretty cool! And with the characters that it happened with, well, yeah, that was pretty great!

So the big twist as to who the bad guy was? That was totally unexpected, but it worked out so well! And I think, it's telling of how society has changed, that while the actions were totally wrong, well, the feelings weren't. Yeah, even if they weren't reciprocated.

I enjoyed this book a lot, it was really entertaining and great, and I just enjoyed it a lot! 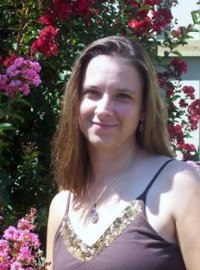 Bio:
Laura “Luna” DeLuca lives at the beautiful Jersey shore with her husband and four children. She loves writing in the young adult genre because it keeps her young at heart.  In addition to writing fiction, Laura is also the sole author of a popular review blog called New Age Mama. She is an active member of her local pagan community, and has been studying Wicca for close to eight years.