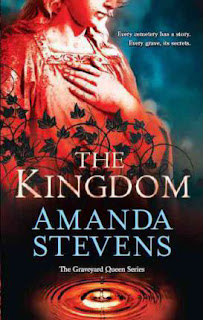 From Goodreads:
Deep in the shadowy foothills of the Blue Ridge Mountains lies a dying town…My name is Amelia Gray. They call me The Graveyard Queen. I've been commissioned to restore an old cemetery in Asher Falls, South Carolina, but I'm coming to think I have another purpose here.

Why is there a cemetery at the bottom of Bell Lake? Why am I drawn time and again to a hidden grave I've discovered in the woods? Something is eating away at the soul of this town—this withering kingdom—and it will only be restored if I can uncover the truth.

My Review:
OK, this book, was just as good! And even better, because the mystery is more personal, was Amelia discovers more, and yeah, it's freaking fantastic! I just want more! And I'm going to read more, just as soon as I can!

Loved spending more time with Amelia and her ability, and the mysteries that she discovers here, and how they're connected, to each other, and to her. Because she has a very extreme connection there! And it's a bittersweet one!

Because her mom was from there, and died there. And the whole thing is shrouded in secrets that no one by Amelia wants to uncover. Because some things were buried for a reason. But sometimes that reason isn't good enough, or it only serves the bad guys!

The town was really creepy, and I would never want to visit there, let alone live there, but it's also got a pretty great history and atmosphere! It's just not one that I would like! And when Amelia discovers all the secrets that she can, well, she doesn't want to stay, either!

What a great book, great mystery, and great characters, and again, I want more!