The Weight of Night: Review 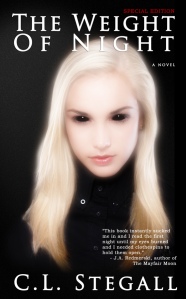 From Goodreads:
When her mother is taken from her in a terrible accident, Alexis finds herself facing some previously unknown truths. Her best friend, Keats, is her only confidante when she is faced with an apparent stalker who claims that Alexis’ entire life is built around a lie. Alexis is suddenly thrown into a whirlwind world of danger and secret agendas, of demigods and deities.

When a brutal, self-righteous god decides that Alexis is his best hope for retrieving an ancient artifact, she finds herself on the self-discovery journey of a lifetime - tracking a killer and a kidnapper - and facing conniving and dangerous foes along the way.

She will have to come to grips with who she truly is and just what she might be capable of if she is to survive long enough to save the one person in the world for whom she cares most.

Ancient Greek mythology comes to life in this unique coming-of-age tale that spans the globe and the heart of a girl who only wants to be normal. But, just what is normal in a world like this?

My Review:
Oh, this was a fantastic book! I loved the different gods that we got to see, and then the progeny, and the different abilities that they got from their god(dess) parents, really unique, and lots of fun to read! The plot was very interesting, and we got to see many interesting places like Russia, and England, which was pretty sweet! And there was Nyx, which isn't a common Greek Goddess, at least, to me, so that was unique, and I just loved it!

The beginning of this book was a bit hard to get into, because all the interesting stuff hadn't been introduced, it was the table getting laid for that, plus I was really, really tired, but then after the first 30 or so pages, everything just kicked into overdrive, like a confirming of an ability, discovering a new one, and then more death, and vengeance. And then world travelling, with little puzzle pieces along the way!

The Weight of Night was half adventure novel-they do travel the world, and have lots of fights/battles/action scenes, a quarter friends to in loves romance, and a quarter mystery, uncovering the clues as where the person who she thought had killed her dad was to finding Keats. And yeah, that combination was perfect, keeping the book going, and lots of awesome sauce!

In the edition for this tour, it was the special edition, and it had 2 short stories, one, the one where Lily started on the path to where she got to in this book, and the second one, was about the story of Rose and Aaron. The first story, very nice, we got to know Lily a lot more, and more about the backgrounds to what it was like for a demigod, which was pretty sweet, since Alexis wasn't really a typical demigod in that she had the woman who raised her and all, and then her dad, too, while the rest of them so far have only had 1 parent raising them. Aaron and Lily's story, well, it was really sweet, and heart-breaking, that they have this love, but that she get's lost in her mind because of a fear. And yeah, it was just so great!

I just loved reading this book, and the sneak peak of the next book, well, it just makes me want it now! You guys should really check this book out, since it's really good!

Bio:
C.L. Stegall is a Dallas-based author. He was born in North Carolina but will always call southern California home. He spent ten years in the U.S. Army, as both an engineer and a linguist for Military Intelligence. He has written innumerable short stories and novellas. His latest novel is a Special Edition of "The Weight Of Night", which contains two additional tales of the Progeny, "Trinkets And Arrows" and "Soldier Boy."

He is also the Editor of - and author in - 4POCALYPSE: Four Tales Of A Dark Future.

Stops on the Tour:
Here
Posted by Louisa @ Words I Write Crazy at 12:00 PM