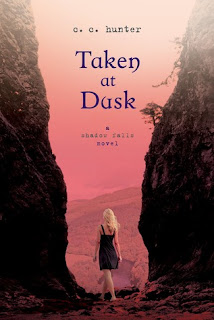 From Goodreads:
Step into Shadow Falls, a camp for teens with supernatural powers.  Here friendship thrives, love takes you by surprise, and our hearts possess the greatest magic of all.

Just when she and Lucas are finally getting close, she learns that his pack has forbidden them from being together.  Was it a mistake to pick him over Derek? And it's not just romance troubling Kylie. An amnesia-stricken ghost is haunting her, delivering the frightful warning, someone lives and someone dies. As Kylie races to unravel the mystery and protect those she loves, she finally unlocks the truth about her supernatural identity, which is far different—and more astonishing—than she ever imagined.

My Review:
Emotionally, this book is a bit easier. Besides the ending, which was full of things. But it's easier-she's with Lucas, and things are pretty good, there's a bit of a thing with Derek bring Ellie to Shadow Falls, Ellie that he slept with before, and just once again when they met again, and all that.

That beginning! I mean, it was such a cliffhanger, what with her dad's adoptive parents coming, showing up, and then having to meet them in this book! And to find out that they aren't who they said they were! But Kylie's brain pattern opens up, yeah! Except that it says that she's human, but we know she's not fully, like

OK, I guess things aren't so smooth with Lucas, but the synopsis is a bit over exaggerating, that Fredericka told Kylie that Lucas' bloodline is pure, and he wouldn't get on the council if he didn't conform with their rules. And then how his grandmother talked to her about that, too. And then there was the whole Miranda/Perry/Cute Warlock situation, and Burnett got turned into a kangaroo! So funny! And so cute!

The ending, was pretty emotionally packed. Between Ellie's death after chasing off someone connected to Mario and Red, and then Red protecting Kylie from his grandfather, to the point where Mario killed Red, and then yeah, realizing the ghost is her grandmother, finding out she's a chameleon, and that her dad's going to be working that out together with her soon, Derek's deceleration of love, and seeing a ghost with Holiday's face? Packed.

So yeah, another cliffhanger ending, can't wait to read the next book!