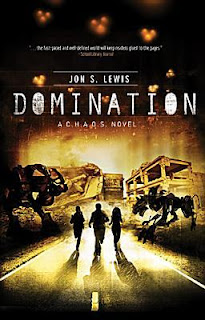 From Goodreads:
THEIR GOAL IS SIMPLE: TOTAL DOMINATION.

With six arms and jaws that can snap a man in two, the warmongering race of aliens known as the Thule has conquered every planet they've attacked.

And now their invasion of Earth has begun.

Humanity's only hope springs from a mysterious Thule legend about a Betrayer, who they believe will rise up and destroy their people. The American government tried to manufacture their own Betrayer by injecting children with Thule blood but time after time the experiment failed . . . until Colt McAlister.

A decade later, Colt is a 16-year-old cadet at the CHAOS Military Academy where he's training to defend mankind. But he's afraid that the alien blood may be turning him into a Thule—and he's beginning to suspect that fulfilling his role as the Betrayer may cost him everything.

Experience a cosmic battle filled with high-tech gear, gateways to other planets, and ultimate stakes. Not everyone will survive. But heroes will rise up and step into their destiny in this earth-shaking conclusion to the C.H.A.O.S trilogy.

My Review:
This was such a fantastic book. While I am sad to say goodbye to these characters, the series was left in a good place, where they are free to have adventures, but the big bad is gone, and, well, the save the world responsibility is over.

While I can't remember exactly where Alienation left off, Domination picks up where the Thule have attacked and the whole "we're not alone in the universe" is done and over. And man, did the pages just fly, with such a compelling story, plus Oz and Danielle were so cute together!

One thing that I personally didn't like was that the ending just ended, there wasn't a lot of after the fact details, beyond that they weren't at war with the Thule anymore. Which left a lot of questions for me like what about Sanctuary, which if you've read the book, then you'll know what I'm talking about.

Other then that, this was a really great book, and a great series, so I hope you guys check it out! 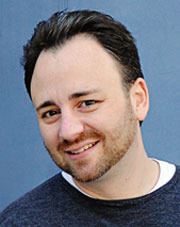 Bio:
JON S. LEWIS is also known for his acclaimed Grey Griffins series. After selling nearly a million copies in the original trilogy, he and his writing partner, Derek Benz, teamed up again to produce the Grey Griffins Clockwork Chronicles. Lewis has also written for the DC Comics family of publishers. He is a graduate of Arizona State University's Walter Cronkite School of Broadcasting, and currently resides in Arizona with his family.

April 17th:
The Solitary Bookworm - Review
A Dream Within A Dream - Review