Week 16 Review: With This Collar 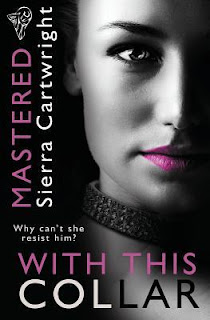 From Goodreads:
Julia Lyle will have nothing to do with domineering men, no matter how tall, dark, and sexy. But Dom Marcus Cavendish will be satisfied with nothing less than collaring the fiercely independent Julia.

Nothing could have shocked her more…

Julia Lyle is invited to her best friend's wedding and is stunned when Lana kneels to accept her husband's collar. When Julia starts to object, firm, relentless hands land on her shoulders. The man behind her threatens to turn her over his knee if she interrupts. She's outraged, but there's no doubt he's serious.

After the ceremony, he offers her a glimpse into her friend's lifestyle, if she's brave enough to accept.

Master Marcus Cavendish is everything she doesn't want in a man—dominant, self-assured and arrogant. So why can't she resist him?

Telling herself that learning about the lifestyle will make her a better friend, Julia agrees to submit to Master Marcus, but only for the evening. Firm and unrelenting in his handling of her, he introduces her to his tawse and the pleasure/pain of a spanking delivered by a competent Dom. The experience unnerves her, making her question everything she thought she knew about relationships, and his forced orgasms leave her shattered.

No doubt the scene seduced her, and that makes her doubly determined to avoid him. She has fought hard for her freedom and vowed only to date nice men, and Master Marcus is anything but safe.

Marcus is undeterred. Julia is a natural sub. The way she responded to his touch, his voice, his punishment proved it. Now he has to convince her to yield to him, submitting to his tawse as she kneels to accept his collar.

My Review:
I enjoyed this book a lot. It was not something that I would ever want to see in real life, but books are different, and easier to deal with things that in real life I would avoid. After all, a marriage that adds a collar? That's not a traditional marriage!

If I were Julia, then I would have answered the threats with calling the police, or leaving the wedding. A friend wouldn't subject another to pain, like Julia's friend did. And not telling her ahead of time? That was just awful!

Honestly, it felt like this book was too short! It felt like there was a lot more story to tell, more things to explore, more places to grow as characters overall. And yeah, I kinda miss that time that could've been in this book!

Both of these characters have been burned by past relationships. Julia with overbearing guys, Marcus with basically what Julia is in the beginning. But somehow, they both get past that and get their happy ending, which, great for them!

I enjoyed this book, I didn't expect to, and it's not for everyone, but it was a really fantastic story!