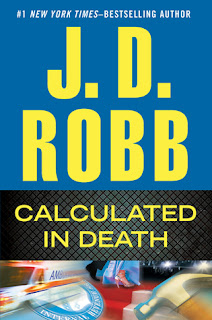 From Goodreads:
On Manhattan's Upper East Side a woman lies dead at the bottom of the stairs, stripped of all her valuables. Most cops might call it a mugging gone wrong, but Lieutenant Eve Dallas knows better.

A well-off accountant and a beloved wife and mother, Marta Dickenson doesn't seem the type to be on anyone's hit list. But when Eve and her partner, Peabody, find blood inside the building, the lieutenant knows Marta's murder was the work of a killer who's trained, but not professional or smart enough to remove all the evidence.

But when someone steals the files out of Marta's office, Eve must immerse herself in her billionaire husband Roarke's world of big business to figure out who's cruel and callous enough to hire a hit on an innocent woman. And as the killer's violent streak begins to escalate, Eve knows she has to draw him out, even if it means using herself as bait. . .

My Review:
I really enjoyed this book so much! The latest instalment in this series that's been coming out since just a year after I was born, yeah, it tells you something, when your lifetime of almost 19 years is just a year longer then a book series. It tells you that series is freaking amazing!

This was a really fantastic instalment in this series! Eve and Roarke work so well together, a partnership that's been working out the fine kinks for 35 other books, and just run so smoothly in this book! It was a really great!

I found the whole murder mystery, the situation to be so sad. That they killed her, an innocent mother and wife, who's also related to a judge shows two things, that a) they have no morals, and b) they aren't very smart. Probably a bit desperate, but if you do bad things, then there are consequences! Which also makes them cowards.

I really enjoyed the take down, it was a really justified, and warranted, and awesome one! I just love Eve's personality, that she gets the bad guys, and yeah, this book was a great example of who Eve is! So awesome!

Loved reading this book, it was epic, and I can't wait for Thankless, is sounds awesome!