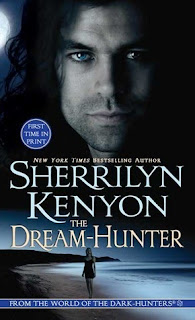 From Goodreads:
In the ethereal world of dreams, there are champions who fight to protect the dreamer and there are demons who prey on them...

Arik is such a predator. Condemned by the gods to live eternity without emotions, Arik can only feel when he's in the dreams of others. For thousands of years, he's drifted through the human unconscious, searching for sensation. Now he's finally found a dreamer whose vivid mind can fill his emptiness.

Dr. Megeara Kafieri watched her father ruin himself and his reputation as he searched to prove Atlantis was real. Her deathbed promise to him to salvage his reputation has now brought her to Greece where she intends to prove once and for all that the fabled island is right where her father said it was. But frustration and bad luck dog her every step. Especially the day they find a stranger floating in the sea. His is a face she's seen many times.... in her dreams.

What she doesn't know is that Arik holds more than the ancient secrets that can help her find the mythical isle of Atlantis. He has made a pact with the god Hades: In exchange for two weeks as a mortal man, he must return to Olympus with a human soul. Megeara's soul.

With a secret society out to ruin her expedition, and mysterious accidents that keep threatening her life, Megeara refuses to quit. She knows she's getting closer to Atlantis and as she does, she stumbles onto the truth of what Arik really is.

For Arik his quest is no longer simple. No human can know of a Dream-Hunter's existence. His dream of being mortal has quickly turned into his own nightmare and the only way to save himself will be to sacrifice the very thing he wanted to be human for. The only question is, will he?

My Review:
I just absolutely loved rereading this book! We get to see Tory for the first time, we get some more time with Kat, who we haven't seen since Kiss of the Night, and yeah Geary and Arik are just an awesome couple to read about!

It's funny, but Arik's kinda the one that got them into this bind, he was the one that wanted to be human for a bit, and he bargained with something that wasn't his-Megeara's soul. And then he falls in love with her. But there's still that bargain.

So this is the first official Dream-Hunter book, and it was interesting, if a bit horrifying, kind of world, what with them not supposed to be feeling emotions. Which is just freaking mean! And there are some really interesting characters there!

Loved that ending, where it's like the one Greek story about getting out of the Underworld, but not looking back, no matter what, and how Geary and Arik actually make it out, with Kat as their guide. I really enjoyed that!

Such a great book, I enjoyed it a lot, and now I can't wait to reread more!