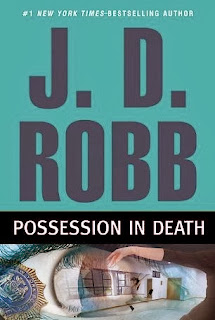 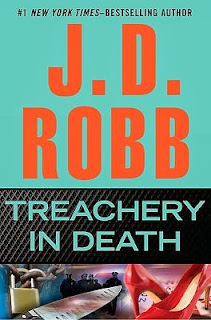 From Goodreads:
'The devil killed my body. I cannot fight. I cannot free her. You must. You are the one.'

A dying Romanian woman's words send a chill down Lieutenant Eve Dallas' spine. And soon Eve notices some interesting side-effects: visions of the deceased and even fluency in Russian.


Against her better judgment, Eve is convinced the spirit of the old woman is inside her, unable to rest until she's found her great-granddaughter who vanished two months ago. Desperate to be back to normal, Eve realises a string of young women have gone missing, and if Eve doesn't find them, no one will.

From Goodreads:
Detective Eve Dallas and her partner, Peabody, are following up on a senseless crime—an elderly grocery owner killed by three stoned punks for nothing more than kicks and snacks. This is Peabody's first case as primary detective—good thing she learned from the master.

But Peabody soon stumbles upon a trickier situation. After a hard workout, she's all alone in the locker room when the gym door clatters open; and-while hiding inside a shower stall trying not to make a sound—she overhears two fellow officers, Garnet and Oberman, arguing. It doesn't take long to realize they're both crooked—guilty not just of corruption but of murder. Now Peabody, Eve, and Eve's husband, Roarke, are trying to get the hard evidence they need to bring the dirty cops down—knowing all the while that the two are willing to kill to keep their secret.

My first review of Treachery in Death
My Review:
So this was the first time that I've read Possession, but it was the second time that I've read Treachery. And that balance felt delicious! So awesome! I just love reading this series, and all together, the books are just so freaking good!

Possession was really good-and really creepy. There have been other touches of the supernatural, but this is really the first one that Eve accepts it, and works with it, at least to the degree that she did! And I kinda guessed who the bad guy was by the end of the interviews at the studio. And this book has that party that Indulgence kept mentioning! So good!

Treachery, oh, conflicted feelings about this book. Well, the book is really great and I love it. It's just that it's about a corrupt cop, which had to happen some time. And it's also where Peabody got to really take charge, especially since she was the one that overheard them!

Taking down the bad guys, felt extremely gratifying, they were bad guys pretending to be good, and that's one of the worse kind of bad guys. But there were some good guys in her squad, and Eve had some really excellent help from the one lady!

Such great books, I just love reading them! Can't wait to reread more!