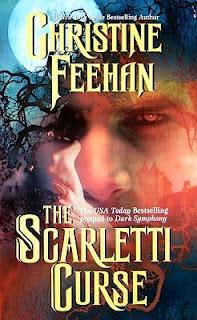 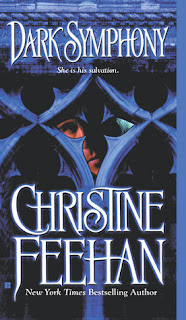 From Goodreads:
Strange, twisted carvings and hideous gargoyles adorned the palazzo of the great Scarletti family. But a still more fearful secret lurked within its storm-tossed turrets. For every bride who entered its forbidding walls was doomed to leave in a casket. . . . Mystical and unfettered, Nicoletta had no terror of ancient curses and no fear of being chosen as Don Scarletti's bride - until she looked into his dark, mesmerizing eyes.

From Goodreads:
Blinded and scarred in a terrible accident, Antoinetta Scarletti made music that thrilled the world with its beauty and passion. Descended from a long line of psychics, Antoinetta has learned to rely on her other senses to “see” the world around her, but nothing could have prepared her for Byron. He came to her, drawn by her music, and became her secret obsession. Others fear him, sensing that he is dangerous—a predator—but for Antoinetta he is her ultimate fantasy, her dream lover. He woos her with kisses full of erotic allure, whispering that she is his light, his salvation. Byron has waited an eternity for her, and he will let nothing stand between him and the woman born to be his lifemate...

My Review:
I enjoyed reading the both of these so much! The Scarletti Curse being a historical paranormal romance, and being the ancestors of Antoinetta, the heroine of Dark Symphony, and how that connects the stand alone book to the Dark Saga, is awesome!

I loved the romance and the mystery in Curse, because yeah, they're deep and mystifying, and just sweep you off you feat! Though there are some sad points, like what the guy did because she interfered in his life by wanting a better life for his wife and son, who didn't deserve abuse! Though when we find out who the bad guy is, well, that's not fun!

And that finding out who a bad guy is echoed in Symphony, because in both of them, there's at least one family member that's straight out a killer, or is connected to one, and is leaking secrets and information they shouldn't have. So yeah. not fun!

Oh, Byron's exasperation in his adopted nephew. And the show that he put on for Mikhail, and how they described Mikhail's face. That was hilarious! And I know he's going to go on to great things-he's just the only one of his age, growing up in this time. But it'll get better, dude!

Really enjoyed reading the both of these, they were really fantastic! Can't wait to reread more!