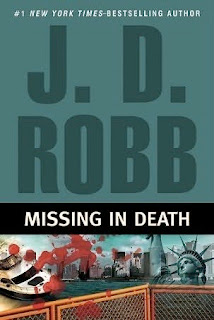 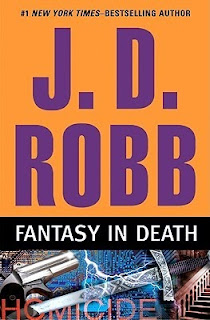 From Goodreads:
Investigating a woman's disappearance on a New York City ferry, Detective Eve Dallas wonders…if she didn't jump, and she's not on board, then where in the world is she?

From Goodreads:
Bart Minnock, founder of the computer- gaming giant U-Play, enters his private playroom, and eagerly can't wait to lose himself in an imaginary world, to play the role of a sword-wielding warrior king, in his company's latest top-secret project, Fantastical.

The next morning, he is found in the same locked room, in a pool of blood, his head separated from his body. It is the most puzzling case Eve Dallas has ever faced, and it is not a game. . . .

NYPSD Lieutenant Eve Dallas is having as much trouble figuring out how Bart Minnock was murdered as who did the murdering. The victim's girlfriend seems sincerely grief-stricken, and his quirky-but-brilliant partners at U-Play appear equally shocked. No one seemed to have a prob­lem with the enthusiastic, high-spirited millionaire. Of course, success can attract jealousy, and gaming, like any business, has its fierce rivalries and dirty tricks-as Eve's husband, Roarke, one of U- Play's competitors, knows well. But Minnock was not naive, and quite capable of fighting back in the real world as well as the virtual one.


Eve and her team are about to enter the next level of police work, in a world where fantasy is the ultimate seduction-and the price of defeat is death. . . .

My Review:
These were really fantastic to read! I'd never read Missing in Death, and yeah, it was a great short story, great and entertaining! And Fantasy, I'd read, and I knew who the bad guy was, but forgot the logistics of how he was killed, and yeah, it was great, too!

Missing was a really great short story, with a great mystery, and while we didn't have much of a chance to get to know there characters who were effected by the possible crime, there were a few hints of who they were, which was great! Great mystery, loved how it worked out!

Fantasy, the technology was pretty awesome! I mean, light that can focused enough to be enough to kill you? Scary, but a bit cool! And interesting! Too bad, that in this book that a) it was developed by a guy, who would later, b) use it to kill!

It also had some really great moments, like the fake gun with those sayings, which was awesome. And the book party for the book by Nadine, based on the Icove case, also known to us as the book Origin in Death. Yeah, so good!