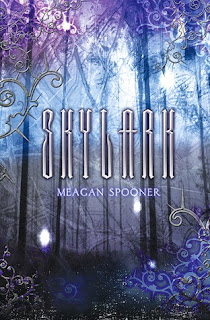 From Goodreads:
Sixteen-year-old Lark Ainsley has never seen the sky.

Her world ends at the edge of the vast domed barrier of energy enclosing all that's left of humanity. For two hundred years the city has sustained this barrier by harvesting its children's innate magical energy when they reach adolescence. When it’s Lark's turn to be harvested, she finds herself trapped in a nightmarish web of experiments and learns she is something out of legend itself: a Renewable, able to regenerate her own power after it's been stripped.

Forced to flee the only home she knows to avoid life as a human battery, Lark must fight her way through the terrible wilderness beyond the edge of the world. With the city's clockwork creations close on her heels and a strange wild boy stalking her in the countryside, she must move quickly if she is to have any hope of survival. She's heard the stories that somewhere to the west are others like her, hidden in secret—but can she stay alive long enough to find them?

My Review:
I enjoyed this book so much, it's pretty hard to find the words to describe it, but words I must find, because I have 3 more paragraphs to write, along with a closing sentence or two!

So this world, I wouldn't want to live in it, but yeah, I enjoyed how detailed it was, how everything worked, because all of little details, they are why these things are happening, and going to keep happening, to Lark!

Oh, that ending! Lots going on, and some victories. But then there's Oren, and that whole situation there. Which was really too bad, I enjoyed reading about him. And then that happened. Oh, well, there's another two books!

What a great book with a great ending, can't wait to read more!