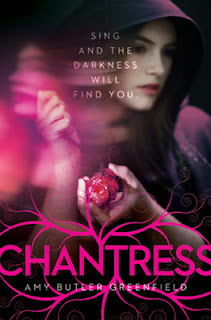 From Goodreads:
Lucy's Chantress magic will make her the most powerful—and most hunted—girl in England.

"Sing, and the darkness will find you." This warning has haunted fifteen-year-old Lucy ever since she was eight and shipwrecked on a lonely island. Lucy's guardian, Norrie, has lots of rules, but the most important is that Lucy must never sing. Not ever. Now it is 1667, Lucy is fifteen, and on All Hallows' Eve, Lucy hears a tantalizing melody on the wind. She can't help but sing—and she is swept into darkness.

When she awakes in England, Lucy hears powerful men discussing Chantresses—women who can sing magic into the world. They are hunting her, but she escapes and finds sanctuary with the Invisible College, an organization plotting to overthrow the nefarious Lord Protector. The only person powerful enough to bring about his downfall is a Chantress. And Lucy is the last one in England.

Lucy struggles to master the song-spells and harness her power, but the Lord Protector is moving quickly. And her feelings for Nat, an Invisible College apprentice and scientist who deeply distrusts her magic, only add to her confusion...

Time is running out, and the fate of England hangs in the balance in this entrancing novel that is atmospheric and lyrical, dangerous and romantic.

My Review:
What an amazing book! I love the idea of Chantresses, of women of power with their voices. But the world hasn't been kind to them, in fact, down right hostile, hunting them down. But then there's Lucy, so there's still a future!

So Lucy's lived almost alone on a island, besides her caretaker, Norrie, pretty much for as long as she can remember. So that would not be that fun, being that isolated. But then she uses her powers by accident, and she's in London. And boy, are things different!

So the main bad guy, the Lord Protector, was just horrible. When they finally took him down, well, that was justice working. Almost. Even though there were costs, and they were renegades and he was the law, he was a corrupted law. So yeah that they won!

I really enjoyed this book so much, and the Chantress world is one I can't wait to visit again!