Week 30 Review: A Fistful of Charms 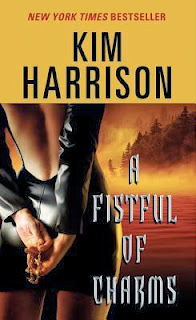 From Goodreads:
Cincinnati witch and bounty hunter Rachel Morgan is confronted by Nick, mortal lover who abandoned her. Savage beasts covet what he possesses, and may destroy the Hollows. While keeping a low profile to avoid eternal wrath of a vengeful demon, she must act quickly. The pack gathers for the first time in millennia to ravage and to rule.

My Review:
Oh, this was such a fantastic book! So much happens, and it's the first book that the main action isn't in Cincinnati. And seeing as I'm not very good with US geography, beyond California, Texas, where New York is, and Florida, that is a pretty great thing, plus it's new! And we got Jenks, which is so good, because we hardly got any of him in the last book!!

Loved that they made Jenks big, it was pretty funny, how she had to keep reminding herself that he was married with 56 kids, because yeah, he's 18 years old, with the body of someone that age, and yeah, it was really quite hilarious!

Their plan was really quite good-and Rachel's editions to it, like that she'd be in the car, and that the focus as actually transferred to the statue that Jenks got, instead of the wolf one, was really quite good for Rachel, someone who isn't really into plans, like she said earlier, she runs her runs, not plans them to death! And the the actual focus, that it was changing from the totem to the original shape? Creepy! And that she could sometimes see tears in it's eyes? Even worse!

I am really starting to hate Nick. First he basically runs away, and then comes back without seeing her, and while that's explained because he thought she was dead, he also sold personal information to Al about her, a betrayal. And then he decided that his thing was more important then her safety. So I'm so glad that she tricked him, he deserved it, plus he took Jax! He totally deserves what he gets if it's bad!

Yeah, this was a fantastic book, and I loved reading about these characters some more, and I can't wait to read more and more and more!!!